New USACE Dredge in the Works 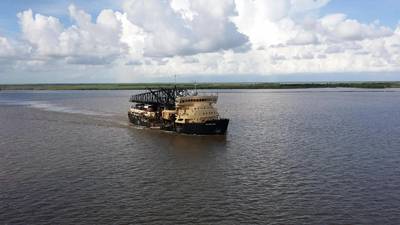 The U.S. Army Corps of Engineers released a contract opportunity on January 25 starting the process to acquire a new Medium Class Hopper Dredge (MCHD) to replace the current dredge McFarland. The new MCHD will be part of the USACE minimum fleet and operate for the Philadelphia District. The January 25 notice is a draft solicitation published to seek industry comments which will inform the Corps’ development of a subsequent “formal solicitation,” likely to be released on or about April 1. In its notice, the Corps emphasizes that the draft is not an invitation for bid. Comments on the draft are due by February 22.

Importantly, USACE also published a second, related special notice announcing that it has scheduled a virtual “Industry Day” meeting – for February 3 – to provide a brief overview of the requirements for the upcoming MCHD solicitation. It will address specific questions relating to the vessel, performance and mission, and ACE seeks “information/feedback from shipyards, dredging designers and dredging suppliers that can be valuable for the government’s effort when planning and preparing the solicitation for the combined design and construction contract of the new MCHD.”

Participants are limited to representatives of shipyards, dredge designers and dredge suppliers or a combination thereof (Joint Venture, Prime/Sub, etc.) reasonably able to perform all of the following major contract components: 1) Planning, 2) Designing & Engineering, and 3) Shipyard Construction. Attendance is on a first come first served basis.

Designed by the Corps' Marine Design Center, McFarland was built in the mid-1960s. According to the Corps, it is only dredge in the world with triple capability for direct pumpout, bottom discharge and sidecasting or boom discharge. USACE says McFarland's mission is twofold: (1) emergency and national defense dredging — as required and on short notice — anywhere in the world, and (2) planned dredging tests in the Delaware River and Bay.