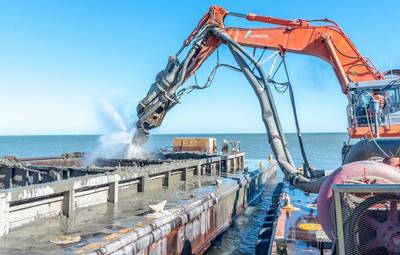 The U.S. Army Corps of Engineers (USACE), Buffalo District awarded a $4,565,000 contract to Michigan-based Ryba Marine Construction Company on May 17 to conduct dredging of the federal navigation channel in Toledo Harbor and the Maumee River.

Dredging of harbors like Toledo’s and rivers like the Maumee ensures accessible depths for large vessels, the continued flow of commodities across the Great Lakes, and the economic viability of United States waterways.

“The heavy manufacturing and maritime transportation sectors are at the heart of Northwest Ohio’s economy. As Chair of the Energy and Water Appropriations Subcommittee, I am committed to securing every federal dollar our region deserves to support these crucial industries. By maintaining and dredging the harbors that facilitate commerce, we strengthen our supply chains and support the hardworking men and women who make, build, and grow America,” said U.S. Rep. Marcy Kaptur (OH-9).

“Maintaining the operation of busy ports like Toledo is a core part of our mission and essential to the economic strength of the nation,” said Lt. Col. Eli Adams, commander of the Buffalo District. “We’re proud of our partnerships with the Toledo-Lucas County Port Authority, the state of Ohio, and our representatives in Congress that have made this contract award possible, and we look forward to dredging this summer.”

Dredging will be focused in the bay channel and is scheduled to take place from early mid-July through mid-December, though the work could be completed sooner.

A total of approximately 800,000 cubic yards of material is contracted to be mechanically dredged from the bed of the harbor and placed in the Toledo-Lucas County Port Authority confined disposal facility.

Dredging of Toledo Harbor and the Maumee River is normally conducted by USACE every year, based on availability of funding. Dredging ensures federally authorized depths are maintained, and the harbor remains accessible to large vessels.

Toledo Harbor is a deep draft commercial harbor which handled an average 8,861,080 tons of cargo annually from 2015-2019. Waterborne transportation facilitated by the harbor supports $494 million in business revenue, 2,157 direct, indirect, and induced jobs, and $163.3 million in labor income to the transportation sector.

Operation, maintenance and dredging of harbors like Sandusky by USACE is critical to the economy of Ohio, the Great Lakes region, and the United States.