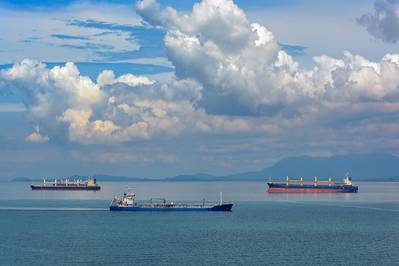 The shipping industry must act now in order to meet U.N. targets to cut carbon emissions by 2050, leading officials said on Wednesday, ahead of a meeting next week that will seek to advance a plan.

The U.N. agency the International Maritime Organization (IMO) has said it aims to reduce overall greenhouse gas emissions from ships by 50% from 2008 levels by 2050.

About 90% of world trade is transported by sea. Carbon emissions from shipping in the six-year period to 2018 accounted for 2.9% of the world’s CO2, the latest IMO-commissioned study showed in August, adding pressure on the industry to bring levels down.

The International Chamber of Shipping (ICS), which represents more than 80% of the world merchant fleet, is among industry bodies that has proposed creating a research fund to find the right technology to meet the targets, which will also bring in governments.

“A 50% total cut in CO2 by 2050 can only be achieved by improving carbon efficiency of the world fleet by around 90%. This will only be possible if a large proportion of the fleet is using commercially viable zero-carbon fuels,” the ICS said in a report on Wednesday.

The proposal will be discussed at the IMO’s virtual Marine Environment Protection Committee session next week as it strives to make progress on carbon goals.

Developers have begun testing environmental fuels, including hydrogen, but the economics are still in doubt.

That poses tough decisions given that investments in ships usually last for up to 30 years, ICS secretary general Guy Platten said.

“We don’t know what the zero carbon future is and yet we have to make decisions in the next five or 10 years which will impact up to 2050,” he told Reuters.

“Societal and environmental pressures are only going to increase and we need to get our game together in shipping.”

A separate report on Wednesday by the industry-led Getting to Zero Coalition also said the shipping industry had “no time to waste”.