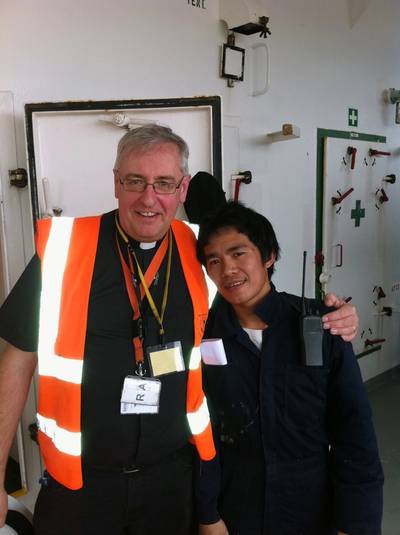 The long ordeal faced by groups of stranded crew supported by seafarers’ charity Apostleship of the Sea (AoS) has finally ended after all the seafarers received their unpaid wages.

The crew were stranded on two ships, MV Torrent and MV Independent, both arrested in Rye and Shoreham-by-Sea in Sussex, England since January last year.

A total of £61,282 unpaid salary has been paid to 12 crew members, from Ukraine and Russia.

Reverend Roger Stone, AoS port chaplain for Shoreham-by-Sea, said, “At last this long-running saga has been brought to an end and the seafarers have received the money that was rightfully theirs.”

Roger and his team of ship visiting volunteers provided practical and pastoral support to the seafarers who were unpaid and left in limbo after the shipping company they worked for fell into financial difficulties.

AoS stepped in to assist the men by raising emergency funds for the crew to send home and by providing food, internet access and phone cards so they could contact their anxious families.

Above all AoS was able to offer the seafarers hope as they were left vulnerable and worried about their futures and that of their families during a very stressful time.

The plight of the men and the assistance AoS provided was highlighted by the national press and television including the Guardian, BBC News, ITV News and the BBC One Show.

AoS is a Catholic charity that provides both practical and pastoral support to seafarers in more than 40 ports around the U.K. and 250 ports worldwide.