U.S.: Ships Should Keep AIS On 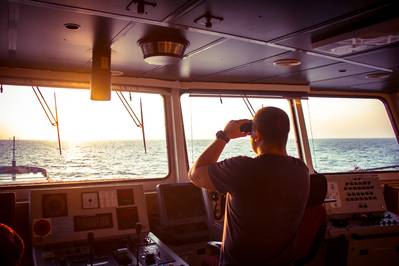 The United States wants all ships to keep their tracking transponders on to cut down on illicit activity and smuggling, and to increase transparency with movements of ships around the world, a senior State Department official told Reuters.

Automatic identification systems trackers are the most accessible way of observing where ships are located.

The practice of turning off AIS by some vessels from countries such as Iran has become common to evade closer scrutiny as the United States pushes to cut off Iranian oil exports.

The official, who spoke on condition of anonymity, said in an interview on Friday that the United States had held public and private discussions with countries and shippers about the need for more transparency and compliance with shipping rules, including ensuring that AIS trackers are always turned on.

"There is absolutely no reason, aside from a ship being off the coast of Somalia, where there are piracy issues, for a ship to turn off its AIS," the official said.

Tensions spiked between Iran and Britain this month when Iranian commandos seized a British-flagged tanker in the Strait of Hormuz, the world’s most important waterway for oil shipments. That came two weeks after British forces captured an Iranian oil tanker near Gibraltar suspected of violating EU sanctions on Syria.

Washington, which has by far the strongest Western naval contingent in the Gulf, on July 9 proposed stepping up efforts to safeguard the Strait of Hormuz.

"A lot of the activity where the AIS is being turned off is happening around that area, perhaps north of the Strait where there are strategic ports that ships use," the official said.

He accused Tehran of trying to evade U.S. sanctions by taking advantage of potential compliance gaps, relying on ships to turn off their AIS to pick up "malign cargo" from Iran and falsifying documents to show the cargo came from countries such as Iraq.

"Iran takes advantage of opportunities by using a ship here, a ship there, to turn off the AIS and get this cargo out," the official added.

The recent seizure by British Royal Marines of Iran's Grace 1 tanker off Gibraltar loaded with Iranian crude suspected to be bound for Syria highlighted the need for more transparency and controls in the shipping industry, the official said.

Panama, which is among a clutch of countries that register vessels under so-called "flags of convenience" that allow them to sail legally, delisted the ship as part of a crackdown on tankers linked to Iran and Syria.

The official said Panama acted after "a whole lot of information pointed to some very troubling activity that suggested there was a malign cargo heading to Syria via Grace 1."

Over a decade ago, the U.N.'s shipping agency, the International Maritime Organization, adopted a convention that required vessels to be fitted with AIS transponders to ensure greater safety at sea.

Ships need to carry automatic identification systems, which collect information about the type of vessel, its position, course, speed, navigational status and other safety-related information to onshore stations or authorities, other ships and aircraft.

This data can be accessed publicly, and during the height of the Somali piracy crisis in 2009, ships would switch off their transponders to avoid detection by gangs in order to protect their crews from being taken hostage.

By Lesley Wroughton and Jonathan Saul