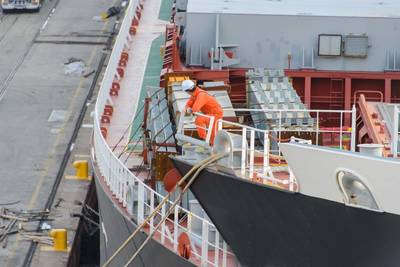 Shipping companies are still struggling to get hundreds of thousands of crew members back home after many months at sea despite pledges by countries to ease transit restrictions for seafarers, industry officials say.

Countries including the UK, the United States, Singapore, the United Arab Emirates and the Philippines pledged this month to boost efforts to help seafarers, many of whom have been on ships longer than the 11-month limit laid out in a maritime labor convention.

Other countries, such as India, have also agreed to do more to help such ship workers.

However, shipping officials say there is still little change in a situation that the United Nations has described as a "humanitarian crisis", while maritime welfare charities have warned of an increase in suicides.

Leading Norwegian shipping company Wallenius Wilhelmsen, which transports cars and other vehicles, said it had rerouted four of its vessels - out of a fleet of 120 ships - to other ports but had so far managed to change over only 45 crew members out of 2,000.

"This is far off from being resolved. The issue is complex and a crew change involves several countries, so the challenge is often contradictory or conflicting regulations between countries, states or even within the country," a Wallenius Wilhelmsen spokeswoman said.

"Given that the situation has been going on for so long, documentation issues are escalating. We have had trouble with visas, medical etc expiring, but now also we have some seafarers whose passports are expiring. With many consulates closed or at reduced capacity, this is a challenge."

Another ship owner, who declined to be named, had to send a ship operating in West Africa to the British territory of Gibraltar – 13 days' sailing time – for crew members to disembark to avoid visa complications in European Union countries.

"Ships and their crews are having to go to extraordinary lengths just to undertake what would normally be considered a completely routine crew change," said Guy Platten of the International Chamber of Shipping.

"There are now over a quarter of a million seafarers trapped at sea and over half a million being impacted. There is still so much more to be done."