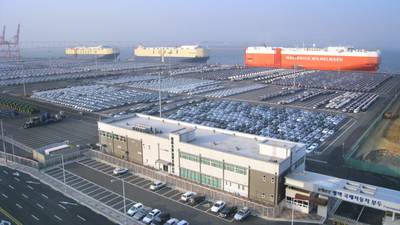 EU antitrust regulators are set to fine Nippon Yusen KK (NYK) and several other Japanese shippers as well as Norwegian Wallenius Wilhelmsen Logistics ASA (WWL) in the coming weeks for rigging bids for shipping cars, according to people with knowledge of the matter.

The EU sanctions follow a near six-year investigation which started with dawn raids by the European Commission in September 2012 in coordination with Japanese and U.S. antitrust authorities.
Competition regulators around the world have penalised a number of shippers in recent years for fixing prices and dividing the markets for shipping cars and other products on various routes.
Norwegian shipping company Wilh. Wilhelmsen ASA confirmed at the time the raids at its 50 percent-owned Wallenius Wilhelmsen unit and EUKOR, in which it has a 40 percent stake.
Other shippers involved in the case include K Line (Kawasaki Kisen Kaisha Ltd) and Mitsui O.S.K Lines, the people said.
The Commission, which can penalise companies up to 10 percent of their global turnover for breaching EU antitrust rules, said at the time that the services under investigation included shipping cars, construction materials and agricultural machinery. It did not name the companies.
Japan No. 1 container shipper NYK, K Line and Mitsui in their 2017 annual reports said they were being investigated by competition authorities in Europe.
The EU competition authority and WWL declined to comment. European subsidiaries of the Japanese shippers did not immediately respond to requests for comment. Their parent companies were not immediately available to comment outside office hours.
WWL took a $200 million provision for all its antitrust cases in the third quarter of 2015, of which $98.5 million was for a U.S. fine, $34 million for a Japanese sanction and $7 million for a Chinese penalty. EUKOR was fined $44 million in the Chinese case.
Australia fined and convicted NYK last year for operating a cartel over vehicle transport to the country.
The Japan Fair Trade Commission in March 2014 handed down fines to NYK, K Line, WWL and Nissan Motor Car Carrier for fixing prices of auto shipments from Japan to North America, Europe and the Middle East while Mitsui escaped a sanction.