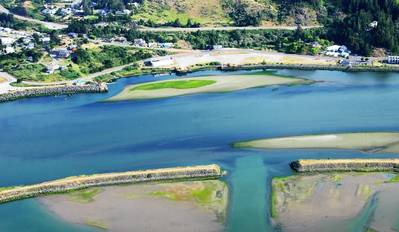 Dredging of the Rogue River at Gold Beach, Ore. is scheduled to begin in June, according to the U.S. Army Corps of Engineers.

In March, Army officials announced the Corps had awarded a $5.3 million contract to Tacoma, Wash.-based American Construction for the dredging operations. Corps staff anticipates dredging will run from June 1 through October 31, depending on weather.

The U.S. Army Corps of Engineers maintains navigation channels along the Oregon coast and dredging is an important component of keeping the Rogue River Harbor open for recreational vessels, including jet boats, fishing guides and sport fishermen.

“Annual maintenance dredging is critical for Gold Beach access,” said Greg Speer, Oregon Coast project manager. “We understand this can have impacts to the fishing industry, so we want to communicate as early as possible that this dredging will be happening this year.

“It’s important for everyone to recognize the need for dredging. As we plan this project, it’s also important for us to communicate with Rogue River users so we can minimize impacts to them, while ensuring safe dredge operations.”

Rogue River dredging at Gold Beach usually occurs on an annual basis for the entrance channel; however, the Corps’ Dredge Yaquina hasn’t been able to dredge for a few years because excessive infill of sediment at the entrance has prevented safe access for this large vessel.

American Construction will also dredge a gravel bar to help reduce the material that blocks the entrance to the boat basin. The Corps anticipates removing up to 200,000 cubic yards of material. The contractor will place the material it removes from this project in the Corps' ocean disposal site, offshore.