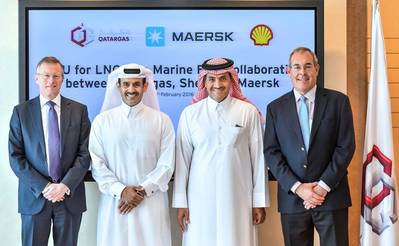 Three heavy weights have come together in the Middle East to promote LNG as marine fuel in the region - Qatargas, the Maersk Group and Royal Dutch Shell Plc signing a memorandum of understanding to explore future opportunities.

All three have pledged to look at ways to develop new markets for using LNG as propulsion fuel.
The MOU envisages Qatargas 4, a joint venture between Qatar Petroleum and Shell, to begin supplying Maersk’s merchant fleet with LNG fuel “before the end of the current decade”, Qatargas, the world’s largest LNG producer, said in a statement.
“The MoU envisages LNG supplies for this pioneering initiative to be made available from Qatargas 4, a joint venture between Qatar Petroleum and Shell Gas BV, with Maersk Line potentially using the fuel for its merchant vessels,” the companies said in a joint statement.
Most shipping companies currently use heavy fuel oil, or bunker fuel, to propel their vessels although LNG as marine fuel has been used by some ships in the past decade.
Khalid Bin Khalifa Al-Thani, Qatargas Chief Executive Officer, pointed out that Qatargas has already “proven” the use of LNG as a reliable marine fuel in the converted diesel engines of the ship “Rasheeda”.
“We are looking forward to continued close work and collaboration with our partners Shell and Maersk to develop the use of LNG to its full potential,” Al-Thani said.
Nils S. Andersen, Maersk Group Chief Executive Officer, said: ‘This cooperation between Qatargas, Maersk Group and Shell represents an important step in developing LNG as a viable fuel for maritime transportation. The possible use of LNG as fuel for ships presents an opportunity to reduce both SOx emissions and in reducing the transport sectors CO2 foot print.’
DNV GL, an international energy and shipping certification agency, says while most of the industry will continue to use heavy fuel oil for now, LNG is being used more, in part because it more easily meets current and proposed emission rules.
• Royal Dutch Shell Plc • DNV GL • energy