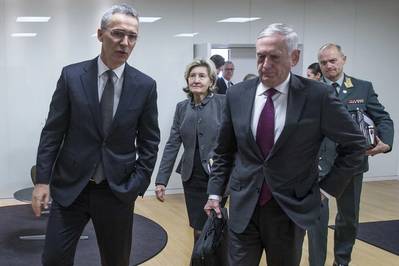 A proposed new NATO logistics command aimed at deterring Russia would be based in the southern German city of Ulm, the German Defence Ministry told lawmakers on Tuesday.
It said a broad plan for the new Joint Support and Enabling Command (JSEC) would be completed by mid-April, with a formal decision by NATO expected at a meeting of alliance defense ministers from June 7-8.
“As a framework nation for the JSEC, we can make a significant contribution to burden-sharing in the alliance,” state secretary in the Defence Ministry Peter Tauber told lawmakers in a letter.
As part of its response to Russia’s 2014 annexation of Ukraine’s Crimea region, NATO is considering the new logistics command to move troops more quickly across Europe in any possible conflict. A second command, a North Atlantic planning and strategy command, would also be set up to keep shipping lanes safe from enemy submarines.
Tauber said locating the command in Ulm would create synergies since the city in southern Germany is already home to Germany’s Multinational Joint Headquarters, which plans and exercises command and control of global crisis management operations for the United Nations, NATO or the European Union.
Germany had also considered sites near Bonn and Cologne.
Diplomats told Reuters last month that the two new commands would have up to 1,500 personnel in total.
Germany’s offer to host the command comes amid growing pressure from the United States and eastern European allies for Berlin to increase its military spending, which still falls short of the NATO target of 2 percent of gross domestic product.
The strategy will add to NATO’s deterrent against Russia, which involves rotating forces in the Baltics, Poland and in the Black Sea region.
(Reporting by Sabine Siebold and Andrea Shalal; Writing by Andrea Shalal; Editing by Peter Graff)
• Baltics • Black Sea • Europe