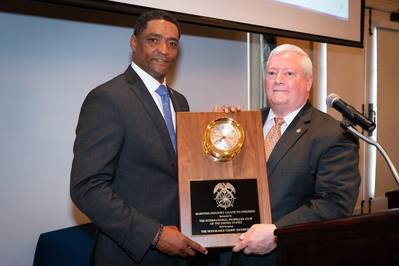 In his role as the new Executive Vice President of the International Propeller Club of the United States (IPCUS), John Cullather, is setting a course for the 50 American-based clubs, specifically, that involve streamlining and improving communication between ports and maritime policy issues and members of Congress.

“Congress has played a vital role in U.S. ports since the founding of our nation,” says Cullather. “From the dredging of our harbors to the construction of lighthouses and the installation of aids-to-navigation, members of Congress have an enormous impact on maritime interests from coast-to-coast.”

Cullather is already cultivating material for member clubs in an effort to help streamline that communication between member ports and their Congressional representatives.

John Cullather was introduced to maritime industry executives on May 1, 2019, when the International Propeller Club of the United States held its 35th Maritime Industry Salute to Congress Dinner at the Army Navy Country Club in Arlington, Virginia. This year’s award, presented by Rear Admiral Joel Whitehead, U.S. Coast Guard (Ret.), President of the Club, was given to the Honorable Cedric Richmond (D-LA).

U.S. Representative Cedric Richmond (LA-02) serves as co-chair of the Congressional Maritime Caucus, a caucus he founded in 2013 with Michael G. Grimm (NY-11). The Caucus raises awareness among members of Congress on a broad range of maritime-related topics.

Representative Richmond spoke of the maritime industry’s enormous contribution to the national economy in playing the vital role of connecting people, goods and information worldwide. He reported that daily the industry facilitates trade and commerce, creates jobs, helps secure our borders, provides energy resources, supports our military and serves as a steward of coastal resources. Onshore, the industry is supported by all manner of professionals in fields such as law, insurance, logistics, dredging, ship repair, security, environmental science, engineering, management, and workforce training.

Propeller Club members and guests were called to dinner by the rousing herald trumpets of the United States Merchant Marine Academy cadets who came down from Kings Point, New York for the event.

“In addition to supporting our U.S.-based clubs with legislative tools and support, we are developing a strategic plan,” says Cullather. “One of the fundamental goals of that plan is to increase membership worldwide - and help the future leaders and maritime employees understand how being a member of the International Propeller Club will help them professionally as well as help their community.” Local clubs, in the global network hold professional conferences, networking events and charitable activities.

“Many of our local clubs raise funds for scholarships and other needs in their community.  This work needs to be supported and recognized,” says Cullather. “We are now promoting these efforts on our web site and are hopeful that this will result in further philanthropic activities throughout the maritime community – both in the United States and overseas.”

“The maritime industry impacts virtually everyone in the United States – from the farmers in Iowa to the person watching their television in Denver,” Cullather says. “Our goal is to make sure that the maritime community includes not just the obvious members, such as those who work at ports, but those who ship goods using the maritime transportation system.”

“We are fortunate to have a longtime maritime expert directing the day-to-day operations and direction of our international network of commercial maritime clubs,” says President of the Propeller Club, Joel Whitehead. “John has been recognized with numerous awards including The Distinguished Public Service Award from the U.S. Coast Guard, The Samuel Plimsoll Award in 2015 from the editors of Professional Mariner Magazine, and The President’s Award from the National Association of State Boating Law Administrators. We look forward to great things ahead for the Propeller Club and member ports and their members.”