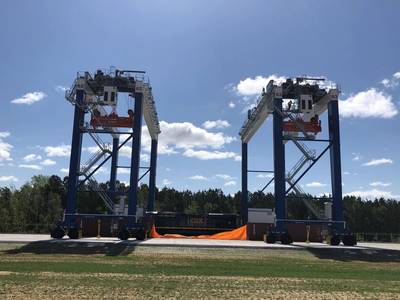 South Carolina Ports Authority officially opened Inland Port Dillon, its second inland facility constructed in the state to handle growing intermodal rail cargo volumes and deepen the port's reach into markets through the Carolinas to the Northeast and Midwest.

"Inland ports provide needed infrastructure in the interior of the state to support the movement of freight to and from our marine terminals," said Jim Newsome, SCPA president and CEO. "The addition of Inland Port Dillon to the port's network diversifies our reach and enables port users to gain logistics efficiencies through rail transportation of their cargo. We've had tremendous support from the Dillon region to date and look forward to growing our cargo base for the facility."
Inland Port Dillon utilizes an existing CSX intermodal train service to handle container movement to and from the Port of Charleston's productive seaport facilities. Inland Port Dillon is expected to convert an estimated 45,000 container movements from truck to rail in the first year of operation.
"Our ports system is one of the most important driving forces behind South Carolina's recent economic success, and with the help of the Inland Port Dillon, it always will be," said Governor Henry McMaster. "With two inland ports and the Port of Charleston soon to be the deepest on the East Coast, South Carolina has strategic advantages that no other state has, and that will continue to pay off for the people of our great state."
The facility will handle the growing volume of container cargo traveling to and from the Port of Charleston via intermodal rail, which has increased 180percent increase since 2011. Today, nearly 25 percent of the port's container volume moves by rail.
"CSX is pleased to be a key link in extending the South Carolina Port Authority's reach from the Port of Charleston to the Pee Dee Region of South Carolina through establishment of Inland Port Dillon," said Dean Piacente, CSX Vice President of Intermodal. "We are confident that the Inland Port will promote economic development in the region and increase the competitiveness of the Port of Charleston and businesses throughout the State of South Carolina. CSX is proud of our role working together with the Port in converting the movement of containers from highway to rail, reducing highway congestion and providing environmental benefits to the citizens of South Carolina while promoting economic growth and commerce."
SCPA opened its first inland facility, Inland Port Greer, in the Upstate region of South Carolina in November 2013. Inland Port Greer handled a record-breaking 124,817 rail moves in calendar year 2017, an increase of 20 percent over the previous year.
"The expansion of SCPA's footprint into Dillon is a significant project not just for our Port, but the entire state," said SCPA Board Chairman Bill Stern. "Inland Port Dillon will provide many advantages to port customers in the Pee Dee region and beyond, enabling them to move their supplies and finished products with greater efficiency to a global consumer base. It will no doubt serve as a catalyst for economic development, and it is an exciting day to bring such opportunities to this area."
Inland Port Dillon is located within the Carolinas I-95 Mega Site with close proximity to I-95, a critical transportation artery in the Southeast. The area is central to a significant base of existing port users, including Harbor Freight Tools, that represent base cargo opportunities for the facility.
"Inland Port Dillon is a complement to the capacity and infrastructure investments underway at port facilities in Charleston to accommodate bigger ships and overall growth of our volumes," Newsome said.
"Inland Port Dillon is a game-changing investment that will shape the future of not only the Pee Dee but all of South Carolina," said S.C. Senator Lindsey Graham. "Building on the success of Inland Port Greer, this facility will give companies an efficient and cost-effective way to move their products across the state, making the Pee Dee an attractive location for investment, economic development and job creation."
"I've worked hard at the federal level and with the Ports Authority to bring Inland Port Dillon to fruition," said S.C. Congressman Tom Rice. "As an extension of the Charleston Port - one of the largest economic drivers in South Carolina - Inland Port Dillon will bring the success of the state's freight industry to the Pee Dee. Inland Port Dillon will be an economic engine for the region, attracting diverse new industry that will create high-paying jobs in Marion, Marlboro, and Dillon Counties. The facility has already created 1,000 jobs in our area, and today's grand opening begins the next stage of economic development that will help uplift our entire community."
"The opportunity for job creation and economic growth driven by this facility in our region cannot be overstated," said S.C. Senator Kent Williams. "This grand opening is an extremely significant day for residents of Dillon, Marion and our surrounding areas. I applaud the Ports Authority and the many partners for making this a reality."
"Today's Inland Port Dillon grand opening is a tremendous development for our region and state," said S.C. Representative Jackie E. "Coach" Hayes. "Providing increased inland infrastructure will create industry growth and provide job opportunities that will benefit our area and the entire state."
Two fourth-graders at Latta Elementary School each earned $500 from SCPA for their school for their participation in a port contest to name equipment at Inland Port Dillon.
The contest was open to all third through fifth graders in Dillon School Districts 3 and 4 during the month of March. Over 100 student entries were received as potential names for the terminal's two rubber-tired gantry (RTG) cranes, which move containers on and off trains.
A team of SCPA employees selected the following two entries, which have been painted onto the cranes: Bluesaurus Rex, submitted by Emily Baxley, and Incraneable Hulk, submitted by J.P. Bley.
• Bill Stern • Carolinas • East Coast