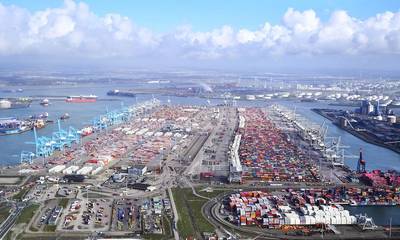 Freight volumes in the Port of Rotterdam improved in the third quarter after the deep slump caused by the coronavirus pandemic in the first half of the year, Europe's largest sea port said on Wednesday.

Throughput of agribulk, iron ore, biomass and goods transported by trucks on ferries showed a marked improvement at the end of the third quarter, the port said, while the number of containers that arrived in Rotterdam also increased.

"Many segments showed a marked improvement in their throughput volumes in comparison with the second quarter", the port authority said.

Overall, however, throughput in the first nine months of the year was 8.8% lower than a year earlier, at 322.3 million tonnes.

The port in April had warned that traffic could fall 20% this year due to the pandemic.

"It is still too early to determine whether we have left the worst behind us in economic terms", port CEO Allard Castelein said.

"Nevertheless, I am heartened by the revival of international trade flows and the resilience of our economy."

Throughput of crude oil dropped 8% in the first nine months of the year, while the volumes of iron ore and coal declined by around 30%.

The number of containers handled by Rotterdam was 2% lower in the January to September period than the year before.