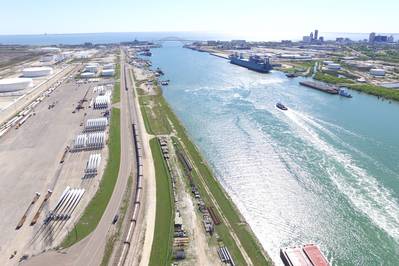 The port’s volume growth in 2018 was driven by increases of crude oil (+11 percent), other petroleum products (+8 percent), and breakbulk shipments (+3 percent).

“This tonnage record is one of many set by the Port of Corpus Christi in 2018, and it is indicative of the continued growth we have been experiencing in the energy sector,” said Sean Strawbridge, CEO for the Port of Corpus Christi. “Our bullish outlook of success is reinforced by this achievement and we look forward to continuing our investments alongside those of our customers as Texas and the United States continues its trend as a strategic global provider of energy.”

The increasing tonnage substantiates the Port of Corpus Christi’s call for the U.S. Army Corps of Engineers to move swiftly in the execution of the Corpus Christi Ship Channel Improvement Project (CIP), which includes dredging the ship channel from 47 feet to 54 feet and widening it to 530 feet, to accommodate larger vessels and allow for safer and more efficient traffic flows.

“The record-setting tonnage supports the critical need for continued investment in infrastructure,” said Charles W. Zahn, Jr., Port of Corpus Christi Commission Chairman. “The Port of Corpus Christi takes pride in ushering in these developments in an environmentally responsible manner. This Channel Improvement Project absolutely will benefit the economy of the Coastal Bend, Texas, and the United States.”