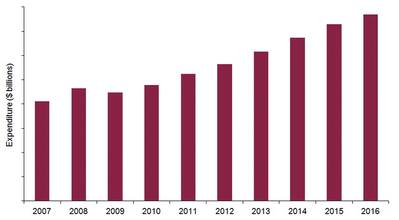 More than $335 billion worth of expenditure is expected over the next five years on offshore oil & gas operations & maintenance (O&M), according to a new report, The World Offshore Operations & Maintenance Market Forecast 2012-2016, by Douglas-Westwood (DW). Growth of 8% in expenditure is forecast annually 2012-2016, with O&M markets considerably less vulnerable to downturn than their capital-led counterparts.

Growing global energy demand
The underlying driver for all activity, both onshore and offshore, is the growth in global energy demand which, for the medium term at least, means demand for hydrocarbons (predominantly oil and gas). Over the long term, the trend towards increasing energy consumption is clear. This has more than tripled over the past fifty years, driven mainly by demand growth in the developing economies of China and India. Inversely, 2008 saw primary energy consumption decrease in a number of countries due to a combination of the global financial crisis and growing environmental concern. Despite improvements in energy efficiency, usage growth in the developing countries is expected to maintain an upward pressure on demand.

Oil supply pressures
At the end of 2011 there were 230 countries and territories in the world; 43% of these (100) now produce oil and natural gas liquids, have produced them in the past or are expected to produce them in the future (at commercial levels). However, 66 countries including the UK, USA and Russia are already well past their production peak (greater than five years) while the remainder will see peak within the next 25 years. The impact of this is that we are likely to see global oil production limit within the next decade (DW estimate 2016).

Cost Inflation & Oil Price
O&M markets are more robust than those led by capital expenditure. Oil price fluctuations do not generally have the same level of impact on O&M expenditure compared to capital expenditure related activities such as drilling and field development. This is mainly due to O&M expenditure being vital to ensuring ongoing production levels, the principal revenue stream for offshore operators, are maintained. As a result DW expect that the majority of the markets covered in the World Offshore Operations & Maintenance Market Forecast are considerably more robust than those relating to the initial development of oil and gas fields with any significant up or downturns in global expenditure being driven principally by industry cost inflation (or deflation).
Despite this a number of the services covered in this report such as well stimulation, wireline operations, subsea well intervention and platform drilling are highly price sensitive and their economic viability is dependent upon a number of criteria including oil price, vessel/unit/rig rates and potential upside in oil or gas flowrates.
Buoyant oil prices have caused rampant cost inflation in the upstream oil and gas sector over the past five years: Since the turn of the 21st century global energy demand has grown rapidly, driven largely by the modernisation of the large Asian economies of China and India. This growth in demand coupled with concerns of future oil supplies resulted in rapid growth in oil prices. In turn, this upward trend in prices drove a flurry of field development activity, placing significant constraints on the available infrastructure and capacity in the market, leading to rampant cost inflation in all sectors of the oil and gas industry.
Post 2008 oil prices slumped following the global recession of the same year. As commodity prices dropped so too did demand for oil and gas related services such as drilling and intervention work, which in turn has seen a downturn in pricing for equipment and services. Industry costs have recovered and are expected to continue to grow over the next five years, but DW expect the operator community to exert far more influence on pricing in order to prevent a repeat of the extreme inflation of the 2003-2008 period.

Role of Offshore Production
As onshore reservoirs continue to mature and new prospects become few and far between, a greater proportion of oil and gas production will be met by the offshore sector.
Since 1945 offshore production has taken an increasing proportion of global supply, however, it was the oil crises of 1973 and 1979 that really emphasised both the necessity and importance of diversification. Where previously the Western world had depended heavily on Middle Eastern oil, the results of the OPEC embargo and Iran-Iraq conflict over the 1973 and 1981 period highlighted the dangers of over-reliance on politically volatile states. As a result the Western world began to look closer to home for oil, sparking a boom in both North American drilling activity and North Sea oil production.
Since the 1980s the focus on offshore production has become less political and more of a necessity as onshore reservoirs continue to mature and new prospects become increasingly scarce. The move to deeper waters in West Africa, Latin America and the Gulf of Mexico will also play a key role in meeting future demand for oil. DW believe that by 2018, 37% of global oil supply will come from offshore with 11% coming from deep water.
Gas is growing in importance as its potential production peak is in 2032, much later than that of oil. The abundance of natural gas, coupled with its relative environmental soundness, its multiple applications across the electricity generation, residential, commercial and industrial sectors and its growing value in the transport sector, means that it will play a progressively more central role in meeting global demand for energy over the next two decades.
Today, much natural gas production is a by-product of oil production. In remote offshore areas such as West Africa, E&P companies will often flare associated gas as they lack the necessary infrastructure to process and produce it.
As natural gas becomes more important in the global energy mix we expect the current appetite for flaring to diminish leading to a boost in offshore natural gas production over the next ten years.

Industry Sectors
Offshore oil & gas O&M covers a variety of sectors. Operations relate to services required for ongoing production, including the supply of labour and raw materials. Maintenance is related to ongoing inspection, repair and upkeep of installed infrastructure, including protective coatings, electronics, and process systems, valves and flowlines equipment, and the maintenance of production wells.

Platform Drilling & Well Integrity
Drilling is often regarded as a Capital Expenditure and whilst the majority of offshore drilling activity is performed through Mobile Offshore Drilling Units (MODUs) a significant proportion is carried out from the actual production platform. By its very nature most platform drilling occurs after hook-up and production has commenced and as such it has been included in our operational expenditure forecast. Platform drilling is not solely development, new breakthroughs in directional drilling have seen many sidetracks (extensions of existing wellbores) being used to gather geological data from the surrounding area and has opened up the potential for exploration drilling to discover stranded reserves in the immediate vicinity.

Logistics
Given the remote nature of many offshore installations logistics play a major role in offshore field costs; supplies, materials and personnel must be transported to and from shore by either vessel or helicopter.

Support Services
Manned offshore installations can house hundreds of workers and as a result a number of support services such as catering, laundry, medic and radio services are required in order to attend to the needs of the offshore workforce.

Asset Services
Asset services relate to expenditure on the upkeep and maintenance of offshore platforms that does not relate directly to the production process. Since the beginning of offshore exploration, 12,067 fixed platforms of varying size and function have been installed offshore. Many of these are now reaching the end of their intended life and whilst ‘old’ assets are still functional they require an increased level of maintenance in order to ensure both productivity and a safe working environment for offshore workers. Asset Integrity covers fabric maintenance services including deck painting, blasting and industrial cleaning services. Also included is the floating platform lease market.

Regional Forecast
In 2011 demand for offshore operations & maintenance services totalled over $52 billion, having grown at a compound rate of over 6% over the past five years. Over the next five years we expect a greater level of growth as the market recovers from the effects of the global downturn of 2008-2009. This will be driven by a combination of high oil prices, buoyant offshore development activity and rampant price inflation for equipment and services.

O&M markets are considerably less vulnerable to downturn than their capital-led counterparts. Whilst global offshore drilling activity dropped by a estimated 14% between 2008-2009, total offshore production (the principal driver for all operational activity) grew by 1%. The global offshore O&M market fell, but only slightly, despite widespread price deflation for equipment and services.
Historical dominance of mature western basins is to be challenged. Between 2007-2011, 40% of global demand was accounted for by Western Europe and North America. Although we expect market growth in all regions (despite the UK and Rest of Western Europe regions facing terminal production decline) we expect the Western Europe and North American share of global demand over the forecast period to drop by a few percent. This shift will be driven by a combination of increasing offshore production in regions such as the Middle East and the movement towards deepwater in less mature regions such as Africa and Latin America.

Conclusions
Production services dominate O&M market expenditure. Over the 2007-2011 period demand for production related services accounted for 44% of global O&M demand. These services are directly associated with production levels from offshore facilities and are intensified as an oil or gas reservoir matures and requires additional effort to sustain production. The inevitable maturing of offshore fields will drive compound growth of over 7% in the production services sector as operators struggle to come to terms with decreasing downhole pressure and increasing water cuts.
The Asset Services market is set to outgrow all other market sectors. For example, the trend towards leasing of floating production systems has led to substantial growth. Between 2012 and 2016 136 new units are expected to be installed of which over half are likely to be leased which  will drive significant growth in the Asset Services market over the next five years.

About the report, author and company:

About the author:
Jenny joined Douglas-Westwood in 2011 as a Researcher, having previously worked within the field of industrial energy generation, distribution and efficiency measures. She is a graduate from the University of East Anglia’s School of Environmental Sciences where she focused her studies on energy management, low carbon energy technologies and scenarios of peak oil. Since joining Douglas-Westwood, Jenny has been responsible for the collation and verification of data from a wide range of sources, her input having being pivotal in the derivation of metrics used to determine future expectations of demand for offshore oil & gas products and services. She has contributed to studies including ‘The World Deepwater Market Forecast’.
Douglas-Westwood is an independent company that carries out business research for the international energy industries. Its market analysis, surveys and forecasts are used by many of the world’s major energy companies, the leading industry contractors and manufacturing companies, financial institutions and government departments. In total, DW has clients in more than 70 countries and to date over 750 projects have been completed in oil and gas, renewable energy, conventional and nuclear power generation.