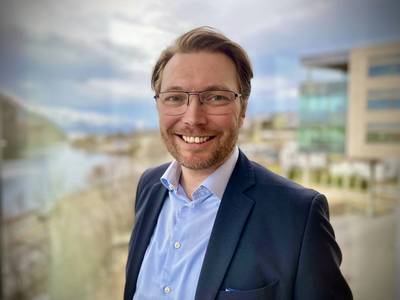 Daniel Garden, CEO of GCE Blue Maritime Cluster, Norway’s largest shipbuilding cluster, got into the maritime game by accident. But the bug bit deep and he is now channeling his energy into the Ålesund-based platform as it forges ahead with a revitalized strategy to accelerate innovation and enable the green shift across the blue ocean spectrum.

Garden is a native of Ørsta, nestled among the rugged Sunnmøre Alps at the end of a fjord of the same name. His father was a diplomat, mostly in Africa. “In the 1980s he was in Khartoum, followed by spells in Nairobi and Lusaka. We had some great holidays,” he says – although he chose not to follow the same path into the foreign office. “I can’t say I mapped out a clear career strategy; I’ve always tried to make the best of where I am and have been lucky in getting great opportunities.” When he graduated in economics from BI Norwegian Business School in Bergen, he first went into banking. Maritime wasn’t on the radar.

‘First taste of maritime’
In Bergen he met his wife who persuaded him to move to Molde where she’d got a job. He landed in sales for an importer of components for the furniture industry. Among his customers were ship outfitters – “my first taste of maritime”. He progressed to key account manager commuting to head office in Copenhagen. Then, in 2012, he joined Saint Gobain-owned building materials and interiors supplier Optimera in a similar role. “I soon found out Saint Gobain had a host of materials that could also be used in ships. So, we decided to set up a dedicated Marine Applications division embracing seven subsidiaries producing everything from glass to pipes and valves – my first micro-cluster in action!”

Garden became CEO of the division working out of Norway, Aachen and Saint Gobain’s Paris HQ. It was a very busy period. “I was travelling six days a week, getting home on Friday and leaving on Sunday. I really missed family life – by that time we had three kids – so it was either move wholesale to Germany or France, or find another job.” He chose the latter, becoming general manager of the Ulstein Business Forum in 2019 promoting the municipality as a regional business hub. “But I jumped at the chance when the CEO post came vacant here in 2021. Having working exclusively towards shipbuilding worldwide for seven years it was the perfect springboard back into maritime.”

Rolling out revitalization
GCE Blue Maritime Cluster, which currently counts 200 member companies in its fold with combined annual revenues of NOK 50 billion (EUR 5 billion), had already formulated its New Blue Deal (NBD) strategy. “What really grabbed me was taking that initiative and making it fly. Leading this kind of process has been the core of my experience. Revitalizing the cluster in terms of reach and enhancing innovation to achieve carbon-neutral shipping by 2030 was a challenge I was itching to get stuck into.”

The NBD sets its aims out clearly. “Now in our 16th year we’re more mature internationally, which requires even stronger commitment from our entire base. We are urging all maritime companies to renew their link to the cluster under new requirements set out by the NIC [Norway’s national cluster program]. “The NIC will pay 50 percent of costs against 40 percent of hours paid by members themselves and a 10 percent financial share. This requires members and partners to re-register and sign a new cluster contract. New participants are also very welcome. Our harmonized activities will ensure we remain a global center of excellence focused on the green transition, increasing exports and R&D. It’s a win-win solution for everyone.”

Quick to adapt
Garden gets to work with many different companies directly. “I’m constantly learning about the amazing scope of expertise emanating out of this tiny region. The cluster grew into the most complete maritime technology hub in the world on the back of having to develop complex systems for increasingly larger, advanced vessels in the North Sea. Historically this was in response to local owners both in offshore oil-and-gas and the fishing constantly looking to improve operations at sea.”

When the bottom fell out of the offshore market in 2014, the cluster had to switch focus. “Thankfully the growing demand for smaller high-end cruise ships, hybrid ferries, advanced fishing vessels and aquaculture service vessels fits us very well. Now we’re adding another story with ocean-based renewables.”

The latest technology is never the cheapest, but that is the essence of the cluster’s competitive advantage; being constantly in the vanguard. “I strongly believe in the benefits of collaboration to facilitate this. The cluster fellowship basically makes it easier to work together. Day to day I see how companies engaging with each other, not just towards customers, really accelerates innovation. The Norwegian poet and language researcher, Ivar Aasen [also from Ørsta], said words to the effect of ‘a candle doesn’t shine any less bright if used to light another candle, and another and another’. The last bit’s mine but you get the point.”

Supercharging innovation
Previously, it was every man for himself wanting to get on the makers’ list for every new ship. “That limited the innovation pathway to some extent. Much bigger steps are possible when you engage with shipowners and energy players as a united force. It’s also about being challenged to meet new demands and new markets. There’s certainly competition and IPR issues within the cluster, but our solution is to form consortiums where everyone’s comfortable.”

He is very inspired by the cluster initiatives taking shape. “There’s lots of exciting stuff happening. Just after I came on board, we established the Norwegian cruise and ferry shipbuilding group, which promises to become a very productive platform. We’re also about to co-host a new conference, Ship Technology Days, in September, which will be a forum for shipbuilding ‘nerds’ to network with peers from 32 countries in the E-Lass [European lightweight applications at sea] network. We also have our annual conference in September.”

“Other examples, among many, are our dialogue with new cruise company Northern Xplorer on developing the world’s first net-zero cruise ships, and our ongoing work with research institutes on autonomy, digital twins and alternative fuels. We’ve also already started a process with German energy company EnBW on greening the production of offshore wind energy through joint innovation work in wind-farm ships and operations.”

The cluster is also very open to working with others, both at home and abroad. “We’ve built up a lot of experience in the cluster mentality, so to speak, and we’re happy to share our insights on how nascent clusters can embed that mentality and move forward.”

The ocean’s huge potential
On a personal level, Garden loves being involved with ocean industries that date back many generations. “We’ve been building ships here even before the Vikings. It makes sense that the word Møre [as in Møre og Romsdal county] is derived from the Latin mare. The ocean’s right on our doorstep and the largest shared resource we have on the planet. I strongly believe it will be the source of many answers to tomorrow’s challenges, from food to medicine and energy. Also, being in the midst of all these highly skilled people and companies succeeding globally is very motivating. It’s a dynamic environment and a great place to work.”

As for individuals who have inspired him, there’s no one star who stands out. “I’ve learned so much from different mentors along the way, especially colleagues. My wife and family are also an inspiring team.”

Adrenaline high
In his university days Garden’s passion was sailing. “As part of a semi-professional crew we raced at events in Kiel, Southampton and Gothenburg. I was on the foredeck. Long arms helped.” Later both he and the kids took up rock climbing, his favorite activity during the season, and he is currently the chair of Sunnmøre Climbing Club. “There are great sea cliffs further south, but the best climbing peaks are right here. We’re planning a cruise in on Royal Caribbean’s Wonder of the Seas this summer, which has a 40-foot climbing wall, so it looks like I’ll be climbing on the high seas, too.”

He also proves the adage that Norwegians are born with skis on. “In the past, it was downhill and cross-country, but now it’s mainly some form of ski touring by either splitboard or randonee skis. When conditions are perfect – with sunshine and spectacular views – it’s like being on top of the world. With majestic nature on all sides, even I think Sunnmøre is exotic!” 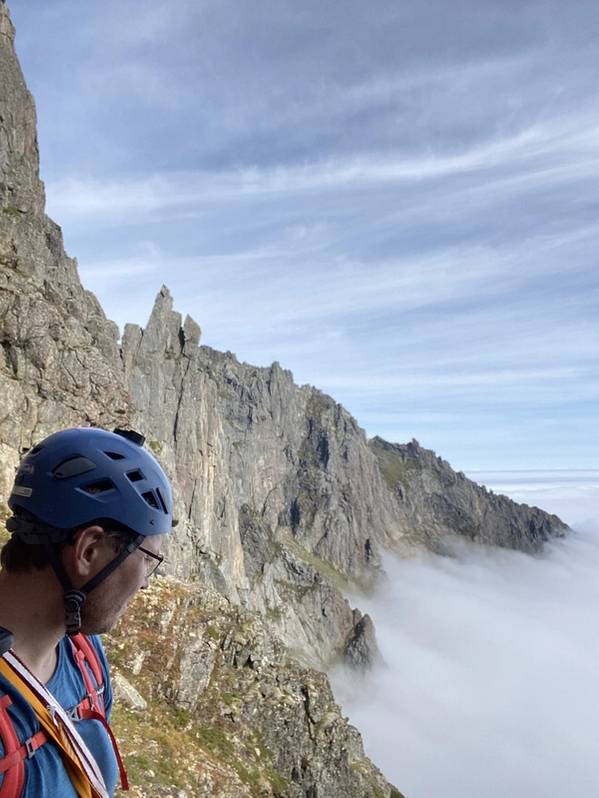 Garden, who is currently the chair of Sunnmøre Climbing Club, admiring the view during a climb of the Holtanna Peak in Molladalen, near his hometown of Ørsta. (Photo: Contributed)