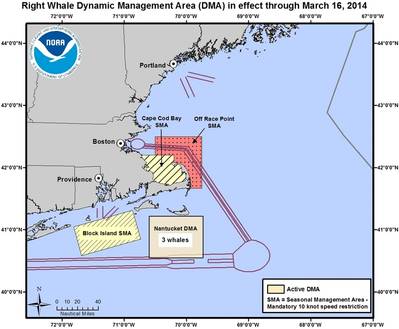 A voluntary vessel speed restriction zone (Dynamic Management Area - DMA) has been established south of Nantucket to protect an aggregation of 3 right whales sighted in this area recently (see image) with immediate effect through 16, March 2014. Mariners are requested to route around this area or transit through it at 10 knots or less.

ACTIVE SEASONAL MANAGEMENT AREAS (SMAs)
Mandatory speed restrictions of 10 knots or less (50 CFR 224.105) are in
effect in the following areas:

Details and graphics of all ship strike management zones currently in
effect: www.nmfs.noaa.gov/pr/shipstrike

NB: Approaching a right whale closer than 500 yards is a violation of federal and state law.