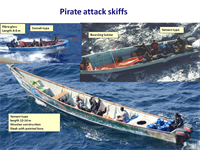 In the last few days the number of pirate attacks off the coast of Somalia has increased highlighting the fact that now the monsoon is weakening, the pirates are once again ready to attack merchant ships transiting through the Indian Ocean.

MC Northwood's Chief of Staff, Rear Admiral Hank Ort (NLD N) states, "in the last few years, it has been the case that come October when the South West monsoon weakens, the pirates have been able to put to sea and we have seen the number of attacks on merchant vessels increase. We are warning vessels that reports show that there are pirate groups operating already in the Indian Ocean, Arabian Sea and Gulf of Aden. Merchant vessels should ensure that Best Management Practices are followed and that vessels continue to make it as difficult as possible for pirates to board and take control of their ships. Our Naval forces are not complacent and remain vigilant. Despite the lull in pirate attacks over the summer due to the monsoon they have continued to patrol throughout the region.”

During the last week of September, there were three attacks and one approach in the Southern Red Sea (SRS), two incidents of suspicious activity in the Gulf of Aden (GOA), one incident of suspicious activity in the Arabian Sea and a disruption of a whaler Pirate Action Group (PAG) in the central Somali Basin. Increased pirate activity continued over the weekend with three ships reporting attacks on Sunday 2nd October in the Gulf of Aden, Southern Somali Basin and Arabian Sea. All three are safe having managed to repel the pirates. The ships did have security teams on board and were aware of self protection measures.

Version 4 of Best Management Practices for merchant ships (BMP4) has been released and provides useful updates to masters in implementing Ship Protection Measures to deter piracy. The new publication is designed in a well-organised layout with greater clarification of terminology and procedures. The changes from BMP3 to BMP4 are based on lessons learned from ships' masters and provide guidance on HOW to implement the recommended practices. BMP4 can be downloaded from the NATO Shipping Centre website www.shipping.nato.int where you will find information about the latest pirate attacks and where they occurred.

NATO has contributed to the international counter piracy effort off the Horn of Africa since December 2008. The mission has expanded from escorting UN and World Food Programme Shipping under Operation Allied Provider and protecting merchant traffic in the Gulf of Aden under Operation Allied Protector. In addition to these activities and as part of the latest mission, Operation Ocean Shield, NATO is working with other international bodies to help develop capacity of countries in the region to tackle piracy on their own.

Standing NATO Maritime Group 1 is permanently assigned to NATO. It is a multi-national Naval Group that provides the NATO Alliance with the ability to quickly respond to crisis situations anywhere in the world. A capable, stand-alone task group and one of four standing maritime elements that form a flexible core around which NATO can build a larger force to meet a wide range of missions that will include non-combatant evacuations, consequence management, counter terrorism, crisis response, embargo operations, etc.