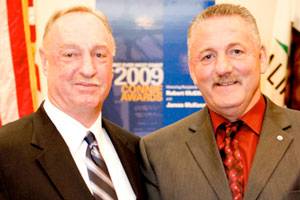 James McKenna, President and CEO of the Pacific Maritime Association (PMA), and Robert McEllrath, President of the International Longshore & Warehouse Union (ILWU), were presented with Connie Awards by the Containerization & Intermodal Institute (CII) at the first ever Connie dinner held on the West Coast.

“The West Coast industry leaders have long requested that CII bring the prestigious Connie Awards to the region,” said Brendan McCahill, CII Chairman. “CII will now make the West Coast event an annual dinner based on the overwhelming success and reception of this dinner.”

Dr. Geraldine Knatz, Executive Director of the Port of Los Angeles, and James Spinosa, former ILWU president, introduced Mr. McEllrath. In 2009, Mr. McEllrath was named to his second three-year term as president of the ILWU.

Mr. McEllrath was appointed in 1993 to the union’s Coast Committee, the body that oversees the Longshore Division contract covering more than 15,000 dockworkers in California, Oregon and Washington. He has extensive contract negotiating experience, having served as the representative for five small ports in the Columbia River area on the Longshore Negotiating Committee for the 1993 and 1996 contracts and in 1999 he served as co-chair of the negotiating committee for contracts. In 2000, Mr. McEllrath was elected international vice president for the Mainland and co-chaired a committee during the 2002 West Coast longshore negotiations.

Mr. McKenna oversees all operations, including administration of payroll and benefits, pension and training to the ILWU workforce and PMA staff. Prior to joining in July 2003, McKenna was chief operating officer at Horizon Lines (formerly CSX). Mr. McKenna has nearly 30 years of domestic and international maritime industry experience that includes overseeing vessel operations, procurement, terminal operations and labor relations activities. The membership of the PMA consists of domestic carriers, international carriers, stevedores and terminal operators that conduct business in California, Oregon and Washington.

Each recipient received a plaque and traditional Waterford crystal decanter. The Connie has been awarded since 1972 to honor those who have significantly contributed to world trade and transportation.

The Pacific Maritime Association Scholarship Award 2009, presented by PMA and CII, was presented to California State University, Long Beach, student Daniel Treichler for outstanding organizational, technical and interpersonal skills. Mr. Treichler was officer of the Global Trade Alliance at CSUF and is pursuing a degree in supply chain management.