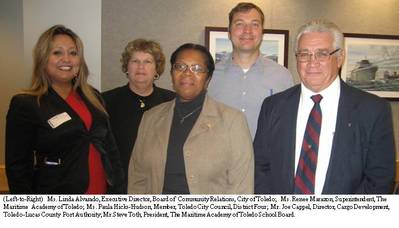 Officials with the Maritime Academy of Toledo met with area community leaders Wednesday and stressed that more has to be done to call attention to job opportunities in the maritime industry, ahead of a predicted shortfall by the Bureau of Labor Statistics. Representatives from Toledo City Council; the Board of Community Relations for the City of Toledo; and the Toledo-Lucas County Port Authority received a briefing from Ms. Renee Marazon, Superintendent of The Maritime Academy of Toledo.

The briefing came a day after the Great Lakes maritime industry released the results of a year-long study that showed the entire Great Lakes-St. Lawrence Seaway navigation system supports some 227,000 jobs --- 28,000 of those in Ohio alone.    The study also showed that the 227,000 jobs contributed $14.1 billion in annual personal income, $33.5 billion in business revenue, and $6.4 billion in local purchases; and added $4.6 billion to federal, state/provincial, and local tax revenues.

“Ohio will see more maritime jobs develop in the near future as shale deposits in eastern Ohio are utilized for natural gas.  Maritime-related transportation of that resource will occur on both coasts in Ohio.   We are already behind the curve when it comes to developing this area of the maritime workforce,” Ms. Marazon warned. Additionally, Maritime Academy of Toledo officials also presented numbers from Bureau of Labor Statistics that predicted a 15-percent job growth in the maritime industry by 2018 --- Higher than the national average for other careers. At the same time, the B-L-S warns that we, as a nation, are not educating enough people to meet that need.

“We asked for the opportunity to meet with area leaders to shine some light on the need to educate more people for jobs in the maritime industry,” said Ms. Marazon.    “We have the ‘perfect storm’ developing in the maritime industry.  The industry is faced with baby-boomers retiring, coupled with regular employee turnover.  That, along with the fact that our maritime institutions are not graduating enough people to meet the need, presents a serious problem for the maritime industry --- Especially when it comes to officer positions.”

As part of the briefing, Ms Marazon presented information on resources with the City of Toledo that are available to position the city as a leader nationally in maritime job retraining. “The City of Toledo has the resources and the technology already in place to become a leader in maritime job retraining and job creation.   In 2003, the American Maritime Officers (AMO) Union constructed a $10 million building on Water St.   Along with that, they placed radar, navigation, bridge, and engine room simulators on the second floor of One Maritime Plaza.   In the years between 2003 and 2008, between 1,000 and 1,500 maritime professionals annually came to Toledo for job retraining and re-certification.   In 2008, the AMO consolidated its operation in Florida, and left Toledo.  However, the AMO left behind a state-of-the-art building and the simulators --- Both being utilized by The Maritime Academy of Toledo,” she explained.

Ms. Marazon explained that The Maritime Academy is already U.S. Coast Guard certified to offer required Basic Safety Training courses to not only students, but adults looking to enter the maritime industry. “In addition to the Basic Safety Training courses, we have courses available that will help people get jobs in the cruise line industry.  These are jobs in administration, accounting, crew purser, and other trades necessary to meet the employment demands aboard cruise vessels.  This is an industry that continues to grow with upwards of 25 new cruise ships expected to launch by 2015.   Each cruise ship needs be 800 and 1,500 employees to operate effectively.   We are working on partnerships with the cruise lines to train prospective employees,” she said.

The bottom line is we have the resources available in Toledo to meet the employment and training needs of the maritime industry.  At the same time we can help unemployed people to find a good paying job and a stable future,” she added. The hour-long briefing included a tour of the resources available at The Maritime Academy of Toledo for job retraining. “Also we told our community leaders that the Maritime Academy of Toledo stands ready to work with other school systems and other community organizations in a partnership to help train everyone interested in pursuing career opportunities in the maritime industry,” Ms. Marazon said.

The briefing was presented as part of Maritime Education Awareness Week at The Maritime Academy of Toledo. On Monday,  Great Lakes Maritime Academy, based in Traverse City, MI, visited the school to meet with students about educational and career opportunities.  At that time, Mr. John Berck, Director of Admissions and Captain Mike Surgalski, announced that the Great Lakes Maritime training vessel, T/S State of Michigan, will make its first-ever stop in Toledo in late-May 2012.   The purpose of the ship’s visit is to give area residents an opportunity to tour the vessel and learn about maritime careers.

Maritime Education Awareness Week continues on Friday, Oct. 21, when Mr. Rodger Norcross, Chief of the Watercraft Division from the Ohio Department of Natural Resources, will visit the school to review its program and speak with students on the benefits of maritime opportunities.