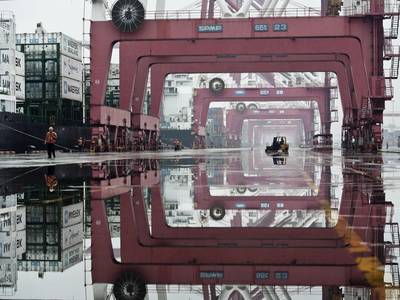 Danish shipping group A.P. Moller-Maersk's is betting on winning new customers for its port division by becoming a one-stop shop that can transport goods from factory to retailers' shelves.
The move comes as Maersk, the world's biggest container shipper, is entering uncharted territory following its sale last year of most of its energy businesses. This marked a major shift of focus for the group towards transport and logistics.
Last month, Maersk said it aimed to expand its port and transport services, giving customers the chance to deal with one company when shipping goods from factory to shop shelf.
Maersk has said it aims to become a global integrator of container logistics and is looking to models similar to the courier express and package industry, where customers deal with just one company such as UPS or FedEx. But Maersk has no plans to enter the courier and package business.
As part of the expansion, APM Terminals, the group's port division, which operates 74 port facilities and handled nearly 40 million containers last year, will expand onshore services to cater to companies like railway operators and freight haulers.
"If we're going to optimise Maersk's entire end-to-end supply chain then of course we need to optimise one of the points that could otherwise be a bottleneck and that's the port," APM Terminal's chief commercial officer Henrik Lundgaard Pedersen said in an interview.
Pedersen said customers were increasingly asking for add-on services at the port terminals, which are the effective "nerve centre" for transporting cargo around the world.
He said customers' were looking to deal with "fewer business partners to do the same or more types of services."
The new services include streamlining the process of weighing, stripping and filling the shipping containers and improving trucker appointment systems for delivery and pick-up.
"In some parts of the world, truckers can wait hours outside our terminals," Pedersen said. The planning to reduce waiting time is becoming "very, very critical," he said.
As part of the plans, APM Terminals has set up landside facilities within customers' premises in Peru and Chile so it can take charge of a cargo before it even leaves the mine or plantation.
"We go all the way into where they grow the grapes, then we help them get them into the right container and all the way through the port to your dining table," Pedersen said.
In Mexico, for example, APM Terminals organises train transport from the Pacific Coast to premises close to Mexico City.
Maersk captured synergies worth $100 million last year from integrating its transport and logistics business and targets total synergies of $600 million by 2019.
Pedersen declined to give details on what investments were expected, but said capital expenditure for handling equipment was "much less" than when taking cargo from ship to shore.
APM Terminals is the second-biggest division after Maersk Line, the world's largest container shipper, and it accounted for around 13 percent of revenue last year.