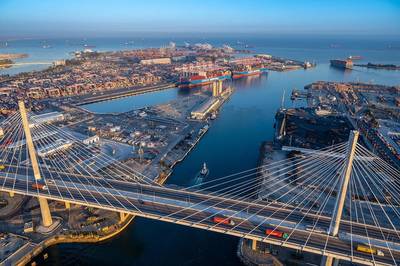 A critical channel deepening project that will help move cargo more efficiently to and from the U.S. advanced Monday after the Long Beach Harbor Commission concluded an extensive environmental review process and greenlit the endeavor.

The work will also allow the port to welcome newer cleaner, and more efficient cargo vessels. The Port of Long Beach and the federal government will share the costs, estimated at almost $170 million. The port’s portion is estimated at $109 million.

“By improving navigation in Long Beach Harbor, goods will speed faster around the supply chain, yielding enormous economic benefits for our city, region, and the nation,” said Harbor Commission President Sharon L. Weissman. “At the same time, it will make operations safer and help lessen environmental impacts on our community.”

“We already accommodate some of the largest ships in the world here,” said Port of Long Beach Executive Director Mario Cordero. “Deepening and improving our waterways will give these vessels more room to maneuver, and to do so more efficiently by taking on more containers, reducing the number of ship calls and associated emissions.”

Among other features, the project includes deepening the Long Beach Approach Channel from 76 feet to 80 feet deep, easing turning bends in the Main Channel to deepen a wider area to 76 feet, deepening parts of the West Basin from 50 to 55 feet, constructing an approach channel and turning basin to Pier J South with a depth of 55 feet, improving the breakwaters at the entrance to Pier J, and depositing dredged material in nearshore sites for refuse or in federally approved ocean disposal sites.

Last October, the U.S. Army Corps of Engineers concluded a multi-year federal study that showed deepening and widening channels in the harbor would lead to improved vessel navigation, safety, and national economic benefits of almost $21 million annually. In July, the U.S. Army Corps of Engineers issued a Record of Decision concluding the federal environmental review process for the project. The important milestone opens the way for projects to compete for federal funding. An environmental impact report the Commission approved Monday is available