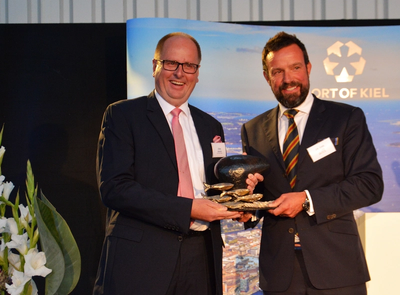 The 2017 annual Port of Kiel Prize has been awarded to Jörn Grage, Managing Director of SCA Logistics GmbH.
The award was presented on Thursday evening, September 14th, by Dr Dirk Claus, Managing Director of the PORT OF KIEL (SEEHAFEN KIEL GmbH & Co. KG) as part of celebrations to mark the “Sprottenback” – the traditional annual social get-together of companies in the port business community. In a speech honouring the Port Prize recipient, Dirk Claus said: “Jörn Grage has, because of his own personal commitment, made a major contribution to the establishment in Kiel of the new SCA Logistics Terminal. The port can now boast two leading global forest product partners - SCA and Iggesund Paperboard.” So far this year, more than 500,000 tons of high-value paper products have already been processed and stored in the new Logistics Terminal, which was opened in November 2016 in the Ostuferhafen.”Paper products”, said Dirk Claus, “have added a further mainstay to Kiel port business and given us growth which is sustainable. Along with the visible investment made in terminal facilities, the expansion of logistic competence on site is also significant.”
The new SCA Terminal was erected on a site of well over 16 hectares in the northern sector of the Ostuferhafen and has a hall storage area of more than 50,000 m². A total of 25 million Euros were invested and 80 new jobs created. “I am very pleased indeed to be awarded the Port Prize”, said Jörn Grage. “The new terminal is tailor-made to our requirements and from a geographical point of view is an ideally-located distribution point for our customers. In addition, good co-operation with the PORT OF KIEL guarantees trouble-free handling of ship arrivals.”  SCA cargo ships call at the Ostuferhafen twice a week from Sundsvall in northern Sweden and offload up to 160 pallets of paper products each trip. Products range from cellulose through newsprint to kraftliners and cartonage products for high-quality packaging - all destined for the German and European markets. In addition overseas containers are packed for shipment out of Hamburg to the Far East. On the return journeys to the Swedish east coast, the SCA ships carry a range of cargo such as vehicles, breakbulk, steel or materials for recycling.
Port Prize Recipient Jörn Grage, Managing Director of SCA Logistics GmbH:
Jörn Grage (52) studied business economy and is a qualified shipping agent. Married with two children, he began his professional career in 1981 at liner shipping agents D. Fuhrmann, Nissle & Günther Nflg. where he was Operations and Sales Manager. In 1990 Jörn Grage moved to HHLA before taking up a position in 1993 as Sales and Marketing Manager of Hansa Rail GmbH – a joint venture of DB and Swedish State Railways. Since 1997 he has worked in the Rail Logistics and Forwarding Division of Schenker AG as Management Representative, Procurist and later Managing Director of Schenker AB, Railog GmbH, Schenker Rail Cargo Deutschland GmbH and Scandinavian Rail Cargo AB. Since September 2013 Jörn Grage has been Managing Director of SCA Logistics GmbH, the German logistics subsidiary of the Swedish SCA concern. SCA develops and produces high-value forest products which are distributed in about 100 countries throughout the world. It is the biggest private forest owner in Europe with 2.6 million hectares of forests and is committed to sustainable forestry management. The SCA group of companies employs about 4,000 people and has its headquarters in Sundsvall in Sweden.
The Port of Kiel Prize 2017
The sculpture for this year’s Kiel Port Prize was created by ANTARIS – the designer and metal smith Patrick Schlosser in Eckernförde - and is in the form of a bollard with sprats swimming around it. The sculpture is a a one-off creation and a valuable piece of metal art, painstakingly hand-crafted by the artist. The bollard symbolises the strong ties between shipping and the port. The sprats, which constantlyswim in shoals, graphically symbolise the community and its determination to always move forward. The prize is awarded once a year on the recommendation of the Advisory Board of the PORT OF KIEL and within the framework of the “Sprottenback” celebrations  to a personality who has, in some special way, earned the gratitude of the Port of Kiel.
Former Recipients of the Kiel Port Prize
The Port Prize was first awarded in 2005. Previous recipients have been: 2005: Samuil Vindergauz (Line Director of the Shipping Company LISCO), 2006: Hans-Dieter Nehrhoff (Technical Managing Director of the Kiel Community Power Plant), 2007: Gunnar Blomdahl (CEO of Stena Line ),2008: Röttger Wittern (Managing Director of Sartori & Berger), 2009:Trond Kleivdal (CEO of the Norwegian shipping company Color Line), 2010: Anders Refsgaard (Vice President of the shipping company DFDS Seaways), 2011: Ingolf Kästner (Head of International Transport at Kombiverkehr KG), 2012: Award of the Grand Seal of the State Capital of Kiel to Heinz Bachmann (longstanding Marketing Director of the SEEHAFEN KIEL), 2013: Claudia Roller (Board Chairman of Hamburg Hafen Marketing), 2014: Frank Erschkat (Head of the Hamburg production centre of DB Schenker Rail AG), 2016: Jos van der Meer (Managing Director of Mibau  Baustoffhandel GmbH).
The Port of Kiel
Kiel is one of the most versatile port locations on the Baltic coast. Terminal facilities for passenger and cargo ships of almost every kind and size are located around the Kiel Fiord. Kiel is an important ferry port with connections to Scandinavia, the Baltic region and Russia. It is also one of northern Europe’s leading cruise shipping ports and plays an important role as a regional supplier of both breakbulk and bulk goods. Ferry services are the backbone of port activity accounting for about 80 % of Kiel’s overall handling of 6.5 million tons in 2016. At the same time, a passenger handling volume of well over two million travellers a year underscores the significance of sea tourism and the port’s competence in the tourist traffic sector. Its geographic location and hinterland rail and road links make the port just as attractive for cargo handling as for passenger services.
• Advisory Board • Claudia Roller • Color Line