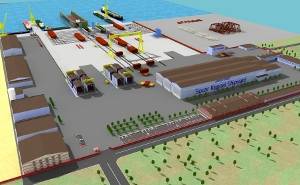 President of Azerbaijan, HE Ilham Aliyev breaks ground for the new yard in the presence of Singapore’s Minister for Foreign Affairs, Mr George Yeo.

The new SOCAR-Keppel Shipyard will be developed over a period of two to three years with an investment of US$386 million. The joint venture agreement will be signed with Keppel O&M taking a 10% share of the yard, and SOCAR and AIC the other 65% and 25% respectively. Keppel O&M will be responsible for the management and operation of the yard, and will have the option to acquire another 10% stake in the next three years.

The new yard is designed to undertake construction of a variety of vessels ranging from offshore support vessels to tankers, as well as ship repair and conversion. Speaking at the yard’s groundbreaking ceremony today, Singapore’s Minister for Foreign Affairs, Mr George Yeo, said, “A new chapter has opened in our bilateral relationship. There is great potential for the strengthening of economic and other ties.

“The oil and gas sector is an obvious area of greater cooperation. Although Singapore has no oil or gas, we have a strong chemicals and maritime support cluster, with many Singapore-based companies supporting the operation of large oil and gas companies. The development of this new SOCAR-Keppel shipyard supports the Oil Strategy promulgated by President Heydar Aliyev.”

Minister Yeo is the first Singaporean Minister to visit Azerbaijan since both countries established diplomatic relations 16 years ago.

Spanning a 1,630-metre waterfront, the yard, when completed, will be able to undertake 80 to 100 repairs and conversions per annum and is estimated to achieve an average annual steel throughput of 25,000 tons when operating at full capacity.

15. Stena Bulk Two New Suezmax Vessels
Stena Bulk of Sweden will be adding another two modern Suezmax vessels to their Stena Sonangol Suezmax Pool. The 159,999 metric ton new building vessel, Yasa Scorpion, being constructed at Samsung Shipbuilding in Korea, is set to be delivered to Stena Bulk on twelve month T/C and consequently be inserted into the Pool in May this year when delivered from the yard.

Stena Bulk also confirmed they have taken the Hrvatska of 171.000 dwt on upto two years T/C with delivery towards summer.

“These two Suezmaxes will all be excellent additions to the Stena Sonangol Suezmax Pool waiting for the series of some twelve state of the art newbuildings to arrive between 2011 and 2013 ordered by Stena and Sonangol” said Ryder.

Stena’s close collaboration with Sonangol, the national shipping company of the West African oil producing nation Angola, is entering its sixth year of successful operation with the aim to become a total fleet of 25 modern Suezmax vessels with an average age of only 3.5 years within short.