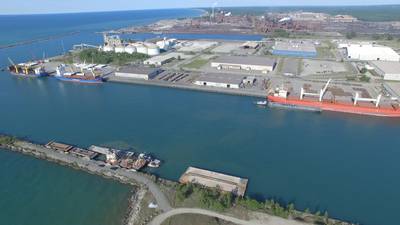 The Port of Indiana-Burns Harbor completed a landmark year in 2017 and is poised for significant future growth as a result of several historic developments.
In addition to handling an 8 percent increase in cargo shipments in 2017, the port doubled the size of its bulk terminal, attracted a nationally-renowned stevedore in Metro Ports, handled its most valuable cargo ever, and announced a $20 million expansion made possible by earning one of only 10 "FASTLANE" small project grants awarded in the U.S. last year.
"We had a strong year in part because our world-class companies continue to drive new business through our port," said Port Director Ian Hirt. "Going forward, we plan to build on this success and make sure this port is well positioned for the future. The continued growth of general cargo shipments managed by our partners at Federal Marine Terminals, the addition of Metro Ports taking over our bulk cargo operations and our strong labor force are all critical elements in this port's success."
The Port of Indiana-Burns Harbor handled 2.8 million tons in 2017 completing the highest four-year total in the port's history, a 27 percent increase over the previous four-year period. Cargoes contributing to the 2017 increase included limestone, steel-related products and heavy lift/project cargoes, such as refinery tanks, laboratory equipment and windmill components.
The most valuable shipment ever to cross the port's dock was called "ICARUS" - the world's largest liquid argon particle hunter - which was unloaded from an ocean vessel in July by Federal Marine Terminals (FMT). Hundreds of Twitter users followed the device via #IcarusTrip as it was shipped in two semi-truck sized containers from Switzerland to the U.S. Department of Energy's Fermi National Accelerator Laboratory ("Fermilab") in Batavia, Ill. The port is a preferred hub for oversized cargoes being shipped by ocean vessels into the Midwest.
"FMT strives to meet the needs of all its customers, regardless of shipment size," said Matthew McPhail, FMT's vice president of sales and marketing. "Our ability to handle large-dimensional cargo is due to our safety-conscious staff, our modern equipment and the facilities the Port of Indiana-Burns Harbor provides."
In 2017, the port was awarded a $9.85 million grant by the U.S. Department of Transportation that will supplement an approximately $20 million expansion, which includes the construction of two rail yards, a new shipping berth, a truck marshalling yard, a 1,200-foot dock expansion, and a new bulk cargo terminal with multimodal connections for handling transfers between ships, barges, rail cars, and trucks.
"This expansion will allow our current companies to continue to grow and help us attract new business for our port and the Northwest Indiana economy," Hirt said.
• Twitter • U.S. Department of Transportation • United States