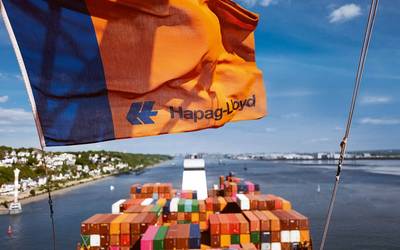 The Hamburg-based company, the world's fifth-biggest container line, is armed with a huge war chest after reporting record earnings during the coronavirus crisis, which dislodged shipping capacity, clogged up ports and drove up freight rates.

The new ships are worth around $3 billion and will add almost a quarter to the fleet in TEU terms, Habben Jansen said.

Just last week, the company also launched a fleet renewal program worth a treble digit million sum, covering more than 150 ships, or nearly two thirds of its fleet, while it is eyeing port terminal investments over the next year.

"It would be logical to invest in port terminal infrastructure at locations where we are already strong," Habben Jansen said, suggesting Europe but adding that North or South America were potential sites.

"I would be surprised if there wasn't an investment in the terminal area within the next 12 months," he said.

Recent purchases of stakes in port hubs include Damietta in Egypt, Tanger in North Morocco and JadeWeserPort in Wilhelmshaven.

The CEO stuck by the company's raised forecasts for full-year 2022 earnings, saying that lower freight rate income and higher energy prices would affect earnings in six or nine months.

"It is true that we are paying significantly more for fuels but there are also first signs that prices of some commodities are falling again," Habben Jansen said, referring to inflationary pressures.

Turning to capacity, Habben Jansen said that an order book worth 28% of total fleet volumes was excessive.

The overcapacity of the past decade, reaching 60% in some instances, was unlikely to return given stricter environmental rules, binding capacity and mandating slower travelling time, he added.