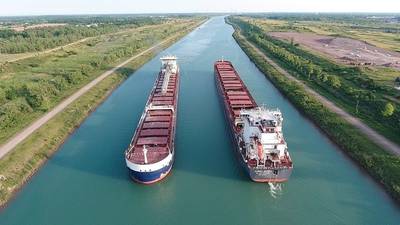 Chamber of Marine Commerce President Bruce Burrows has unveiled a 2019 wish list for legislative and policymakers designed to make Great Lakes-St. Lawrence and coastal shipping more competitive and build on the remarkable growth of the 2018 season.

“Despite an unpredictable business environment of tariff wars and trade negotiations, many of our Canadian and U.S. port members reported increased volumes in grain exports, road salt, construction materials and petroleum products underlining the importance of the Great Lakes-St. Lawrence waterway as a domestic and international trade gateway,” says Bruce Burrows, President of the Chamber of Marine Commerce.  “There is great opportunity in 2019 to build on this economic momentum and work with legislators and policymakers to make significant progress on shipping’s most enduring challenges.”

Legislative and policy priorities for 2019
•CMC will press for the adoption of the Pilotage Review recommendations and support the Government’s commitment to introduce legislative change to the Pilotage Act before the 2019 Canadian federal election.
•New legislation (Vessel Incidental Discharge Act) recently passed in the United States will provide a platform for CMC and its industry partners to move closer to their goal to have a common ballast water management standard for the region. CMC will be working hard with policymakers to ensure that the new regime is harmonious with Canadian rules under development – and most importantly operationally and economically achievable.
•CMC will be advocating for marine-related investments as Canadian/U.S. governments advance their infrastructure plans and supporting creative solutions for additional ice-breaking capacity, e-navigation and ports’ needs.
•CMC will collaborate with partners to inform policymakers of capabilities and constraints around environmental concerns related to Canada’s Oceans Protection Plan, including underwater noise and whale protection.
•The CMC will continue to encourage governments to recognize that ships are the most fuel-efficient and carbon-friendly way to move goods and an important part of the solution to address climate change. As the shipping industry works hard to further reduce its carbon footprint, CMC will advocate for regulatory, policy and program measures that encourage increasing the use of inland shipping, incentivize technology development and reflect the operational realities of our members.

The Chamber of Marine Commerce will kick off its 60th anniversary celebrations at its Annual Marine Club Luncheon in Toronto, a signature event during a week of industry meetings which attracts a crowd of more than 200 Canadian and U.S. shipping, industrial and agricultural executives along with federal, provincial and local government representatives.

The Chamber was formed in 1959 to provide a voice for the customers and ship operators moving goods on the newly opened St. Lawrence Seaway. Today, 60 years later, this bi-national industry association represents more than 130 members along the entire marine transportation supply chain advocating for policy that recognizes inland and coastal shipping's significant advantages in the broader Great Lakes, St. Lawrence, Coastal and Arctic regions.

Burrows concluded: “Marine has a great story to tell. And after 60 years, we remain immensely proud to be able to share the stories of our members — who are always looking for new ways to deliver for their customers, ensure the safety of their people and protect the environment in which they operate.” Fundamentally, this means keeping the $6 trillion economy in eastern North America competitive, with its 329,000 marine-related jobs and CDN$100 billion worth of international and domestic cargo moving by ship every year.