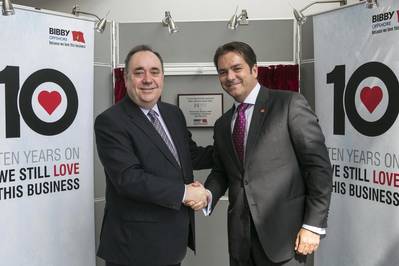 The company recently relocated from Aberdeen Harbour to the new office facility at Prospect Park, Westhill, to provide Bibby Offshore with the additional capacity necessary to support its significant increase in staff numbers and services, as Bibby Offshore’s operations expand both in the U.K. and internationally.

Bibby Offshore is on track to achieve a turnover of £220 million by the end of 2013 and plans to increase this to £650 million by 2017, creating more than 100 onshore jobs in the northeast.

Earlier this month, Alex Salmond was in the Granite City to unveil plans for an oil and gas training initiative, which will be based in the city, as part of an energy skills initiative designed to take advantage of growth in demand for key skill across the key energy sectors of oil and gas, renewables and transmission systems.

First Minister Alex Salmond said, “Scotland’s energy industry is one of our economic success stories and it is therefore vital that we ensure there is a steady stream of professionals equipped with the skills to keep pace with our potential. That is why companies such as Bibby Offshore, whose parent company has such a long and distinguished maritime heritage, are essential in developing the workforce to keep our energy industry evolving, thriving and contributing to Scotland’s economic success.

As part of the official launch of the new building and in line with the company’s 10th Anniversary celebrations, Bibby Offshore extended the invite to the opening of its 53,427 square foot, multi-million pound facilities to Bibby Offshore Schools Ambassadors from  schools across the U.K. including Aberdeen, Lerwick, Liverpool and Glasgow.

The visit will allow them to learn about the wealth of career opportunities at Bibby Offshore, throughout Aberdeen city and shire, and in the oil and gas industry as a whole.

The students, between the ages of 11 and 17, will share their experiences with other schools in their areas through producing a report about their visit Bibby Offshore also donated £1,000 to each school to be utilized in skills development programs.

Bibby Offshore’s Chief Executive Howard Woodcock said, “Our industry is dependent on attracting talented, skilled people and to meet global demand, it’s essential that young people are aware of the excellent opportunities which are available in the North East and within the energy sector as a whole.

Bibby Offshore said one of its core values is to realize the talent of its people, having introduced schemes that encourage individuals to meet their potential including the Engineer Conversion Course, Graduate Training Scheme, Future Managers Program and Bibby Academy. Since starting the Conversion Course in September 2012, the company has added an additional 12 engineers to its staff and is planning another intake of eight in September 2013. Fourteen students have had the chance to experience the Graduate Training Program and Bibby Offshore has plans to recruit a further eight this September. The Future Managers Program has also been a great success – with 65 percent of those who have completed the program having gone onto be promoted into managerial or lead roles.