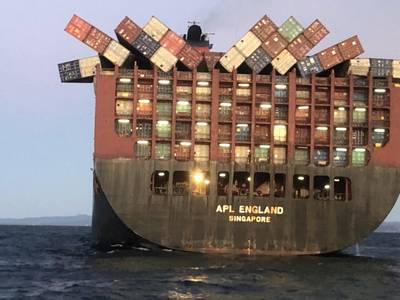 Singapore-flagged APL England dropped dozens of containers off the coast of Australia. Several stacks can be see toppled over on deck.(Photo: AMSA)

The master of Singapore-flagged APL England is facing charges in Australia after the vessel under his command lost dozens of containers overboard in rough seas off the coast of Sydney last week.

The offences relate to pollution and/or damage of the marine environment as a result of poor cargo loading, the Australian Maritime Safety Authority (AMSA) said.

The 5,510 TEU capacity APL England had been en route from Ningbo, China to Melbourne last Sunday when a temporary propulsion loss left the 277-meter vessel rolling in heavy seas, causing several container stacks to topple over about 73 kilometers south east of Sydney. The ship's master said initially that 40 containers were lost into the sea and 74 more were damaged on board. AMSA is reporting that at least 50 containers fell overboard.

APL England was detained in the Port of Brisbane Wednesday after AMSA's inspectors found inadequate lashing arrangements for cargo and heavily corroded securing points for containers on deck that had potentially contributed to the spill.

Commenting on the charges laid against APL England's captain, Allan Schwartz, AMSA General Manager Operations, said, “This and other incidents remind us of the important role the ship’s master has in ensuring the ships that ply our waters are operated safely and do not damage our marine environment.

“Today’s actions should not detract from the responsibility of the ship owner APL Singapore, insurer Steamship Mutual, and operator ANL who remain accountable for remediation of any impacts of this incident.

“We welcome ANL taking responsibility by engaging contractors to undertake shoreline cleanup and retrieve some of the floating containers this week, but the impacts of this incident could take months, if not years to remediate and we expect these efforts to be sustained for however long it takes.”

Twenty-six of the dropped containers are believed to be empty while another 24 hold a range of products including plastic packaging and wrapping, plastic ducting, baby seats, face masks, shoes, bakeware, shovels, rubber lane separators, car seat covers, handwash, breadcrumbs, furniture and pet accessories, according to AMSA. One full container and 13 empties have been recovered to date.

AMSA said it is working with NSW Maritime to located the remaining missing boxes and respond to shoreline impacts. Surgical masks and other contents from the lost containers have been found washing up onto Australian shores.

Detention and financial security
AMSA said the ship will be detained until its cargo stowage deficiencies are corrected, and on Friday it placed an additional requirement on the ship owner under the Protection of the Seas Act which must be met before the ship will be released.

“This action seeks financial security from the insurers in the order of $22 million. This provides a commitment that they will remediate all impacts of this incident. That $22 million covers estimated costs including that of a clean-up,” Schwartz said.

AMSA said its investigation into the incident is ongoing.