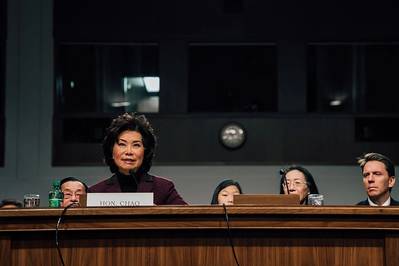 The U.S. Justice Department declined to investigate or prosecute then-Transportation Secretary Elaine Chao after the inspector general’s office referred allegations of potential misuse of office for review, a report made public on Wednesday said.

The report included allegations that Chao directed staff to research or purchase personal items for her online using her personal credit card or performed other personal errands for her or her father.

The report focused largely on Chao’s actions related to her family’s shipping business, the Foremost Group, which was founded by her father and whose current chief executive is her sister.

The report confirmed Chao made extensive plans to include family members in events during a planned, but later canceled, official trip to China in November 2017 that included intended stops at schools that received support from her family’s business.

The report also said Chao had tasked political appointees to contact Homeland Security (DHS) officials on behalf of a foreign student who was the recipient of Chao family philanthropy.

The report also found DOT staff “provided various media and public affairs support” to Chao’s father in 2017 and 2018, including facilitating the booking of a private Amtrak car for Chao’s father and guests to travel from New York to Washington for a DOT event.

In December during the final weeks of the Trump administration, the inspector general’s office referred its findings to the U.S. Attorney’s Office for the District of Columbia for criminal prosecution, which declined to open a criminal investigation, as did the Justice Department’s Public Integrity section.

The inspector general’s report added prosecutors said “there may be ethical and/or administrative issues to address but there is not predication to open a criminal investigation.”

House Transportation and Infrastructure chairman Peter DeFazio, a Democrat who sought the probe in 2019 said he was “disappointed that the Department of Justice declined to further pursue the matters that the IG’s office substantiated in its investigation.”

House Oversight and Government Reform Chairwoman Carolyn Maloney said the report and documents obtained by the panel show “Chao used her official position and taxpayer resources for the benefit of herself and her family.”

The report found no basis to open formal investigations into allegations she steered grant funds to Kentucky, the state represented by her husband Senate Minority Leader Mitch McConnell. An analysis by the inspector general found that Kentucky “did not receive a disproportionate amount of DOT grant funds as a whole.”

The report also found no basis to investigate Chao’s holdings in Vulcan Materials, a large stone and asphalt producer that has received federal grants. She previously served as a director at Vulcan.

A spokesman for Chao said the report “exonerates the secretary from baseless accusations and closes the book on an election-year effort to impugn her.”

Representative Sam Graves, the top Republican on the House Infrastructure Committee, said Chao “will not be diminished at all by this investigation prompted by politically motivated news reports.”