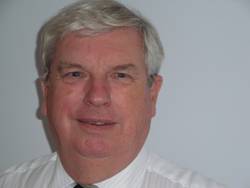 Mr. Noble has worked in commercial shipping since 1962 when he joined HMS Conway, the preeminent pre-sea training school in the United Kingdom.  He served as a deck officer in the British Merchant Marine sailing with shipping lines including Blue Funnel and Palm Line.

After obtaining his Master Mariners certificate, Mr. Noble graduated with a Nautical Studies BSc (Honors) from Southampton University in 1977.  After serving as a claims executive with Thomas Miller (The UK P & I Club), he opened the London office of Murray Fenton & Associates Limited in 1980.  Following the acquisition of Murray Fenton by BMT, in 1999, he was Chief Executive Officer of the Salvage Association until 2005.

His practical expertise lies in dealing with Salvage, Wreck Removal and Oil Pollution after having attended some 60 major casualties, including the HAVEN, BRAER, SEA EMPRESS, IRVING WHALE and ERICA.  He is also an experienced expert witness, recently offering expertise in unsafe port cases and salvage.  Over the past 30 years, Mr. Noble has worked with all of the major salvage companies and until recently was an advisor to the International Salvage Union acting as the General Manager.

He is currently a Trustee of the Maritime London Officer Cadet Scholarship program, a London-based charity funded by city organizations that provides training scholarships for young people wishing to follow a career at sea. “It is a great honor for Donjon to welcome someone of John Noble’s character, caliber and experience to our team in the U.K.  He is highly respected throughout the world-wide maritime communities and we are lucky to have him as our partner ‘across the pond’,” said J. Arnold Witte, President and CEO, Donjon Marine Co., Inc.