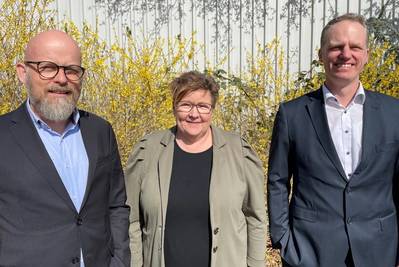 The union Danish Maritime Officers (DMO) has set a new team, with a new director, new chairman and deputy chairman, and has the ambition to increasingly serve its member’s interests internationally.

New chairman is Jens M. Sorensen, who has sailed training ships as a mate and navigator for 20 years and worked with anti-piracy as a risk consultant for more than a decade. The new deputy chairman is Jens Lundgaard, tow master with Maersk Drilling.

“As current events clearly show, maritime personnel need a strong union. There are plenty of issues where the voice of the seafarers must be heard, for example when it comes to the war and humanitarian crisis in Ukraine, implementation of green technology, worker rights, safety and security issues, to name a few,” says Sorensen.

Danish Maritime Officers is the biggest labor union in Denmark for maritime officers. The organization represents around 2,500 – mostly – navigators on Danish contracts, who work in all parts of the industry: long haul, on ferries, offshore, the coastal trades and on land.

“The industry face massive change, both short term and long term. Short term, the world risks critical disruption from the pandemic fueled logistics crisis along with the war in Ukraine and the potential exit of Russian seafarers from non-Russian ships. More long term, the seafarers are the ones who must actually work with new fuels, battery fires and all the rules that go along with them, just as an example,” says the new chairman.

Ambition to recruit internationally
As director, DMO has recruited Helle Andsbjerg, who has had a career as captain with Maersk Line, navigator on a coaster, marine surveyor and international leadership consultant. Further, the board has over the past six months reorganized the secretariat staffing it with experienced hands.

“The first order of the day will be to make sure that all our members get value for money and focus on the problems that our current members have. Then, we will look at how we can assist foreign nationals working in Denmark – for example offshore in the North Sea – or on Danish contracts,” Andsbjerg says.

The union is an independent body under the umbrella of the Danish Association of Managers and Executives.

The new director, will, along with the secretariat’s political consultant and the union’s board, engage more with its international counterparts, build coalitions and strive to make its voice heard at international fora, such as the International Maritime Organization.

“I think current events show that we, as seafarers, also need to show solidarity with each other. Making sure that there are strong international regulation protecting all seafarers and the environment we work in is the only way forward,” Andsbjerg says.