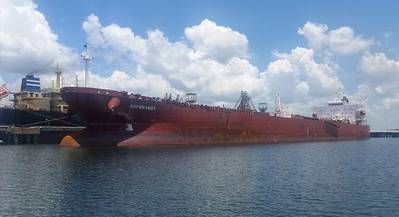 Cuba is using a combination of ship-to-ship transfers and floating oil storage to ease fuel scarcity and power cuts following a fire that destroyed a portion of its main oil terminal, vessel tracking data showed.

Cubans have endured daily blackouts and long waits for gasoline in the aftermath of the blaze, which hit the 2.4-million-barrel Matanzas terminal and killed 16 people this month.

Cuban President Miguel Diaz Canel's administration has increased fuel imports from Europe and the Caribbean while Venezuela and Mexico have helped the communist-ruled island with specialized crews and equipment to extinguish the fire, triggered by lightning, and rebuild infrastructure.

More than 3 million barrels of Venezuelan crude and fuel, Russian oil, European diesel and liquefied petroleum gas from Dominican Republic and Trinidad and Tobago, representing some 230,000 barrels per day (bpd), have arrived in Cuba in the last two weeks, according to Refinitiv Eikon.

Another 200,000 barrels of Venezuelan fuel oil for power generation are due to arrive later this month on the Cuba-flagged tanker Petion, according to schedules from Venezuelan state-run company PDVSA.

Cuba's foreign ministry and PDVSA did not reply to requests for comment.

The Equality has remained anchored off Matanzas, according to the Eikon vessel monitoring data, providing floating storage.

Matanzas' berths for loading and discharging large tankers are operational, but remain disconnected from storage facilities while authorities assess damages to pipelines, pumping stations and tanks, said Jorge Pinon, director of the University of Texas at Austin's Latin America and Caribbean energy program.

Diaz Canel two weeks ago said a survey would be done to determine storage and refining availability after the fire, and to install a new system to quickly discharge and process fuels entering the country.