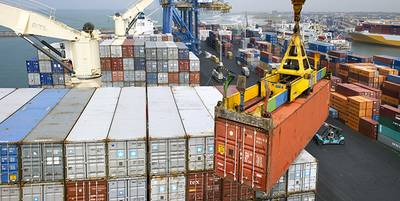 Six of the world's biggest container shipping companies were raided by South African authorities on Wednesday on suspicion of colluding to inflate rates between Asia and South Africa, the country's Competition Commission said.
The development comes as global container lines struggle in the worst-ever market conditions, caused by a glut of ships and slowing global trade, which has battered earnings and forced at least one out of business.
The six companies raided comprise local subsidiaries of Denmark's Maersk, Swiss-headquartered Mediterranean Shipping Company (MSC), France's CMA CGM Shipping, Germany's Hamburg Sud, Singapore-based Pacific International Line and Maersk unit Safmarine, the commission said in a statement.
It said the firms were suspected of engaging in collusive practices to fix incremental rates on the shipment of cargo from Asia to South Africa.
"Any cartel by shipping liners in this region results in inflated prices for cargo transportation," Competition Commissioner Tembinkosi Bonakele said.
"Such cartels have the effect of significantly derailing the economic growth of the region."
A search and seizure operation focused on premises of the six firms will involve confiscating documents and electronic data and follows a tip-off by a member of the public, the commission said.
Maersk, MSC and Hamburg Sud confirmed the raids and said they were cooperating with the authorities. The other companies did not respond to requests for comment.
"The fact that the SACC carries out such inspections does not mean that a company has engaged in anti-competitive behaviour," said Maersk, the world's No.1 shipping line.
In July, EU antitrust regulators accepted an offer from Maersk and 13 competitors to change their pricing practices in order to stave off possible fines.
The European Commission opened a case against the container shipping liners in late 2013, following dawn raids two years earlier.
Maersk parent company A.P Moller Maersk last week announced a restructuring that will see the $30 billion group bulk up its transport business while seeking alliances or a separate listing for its energy operations as worsening freight and oil turmoil take their toll.
Other container lines such as CMA CGM have been looking to build scale. Family owned French group CMA CGM sealed an acquisition this year of Singapore-based Neptune Orient Lines, which has given it market leadership on trans-Pacific routes.
The tough market conditions led to the collapse of South Korean container line Hanjin last month leaving stranded an estimated $14 billion in cargo on its ships.
(Reporting by Joe Brock and Jonathan Saul, additional reporting by Jacob Gronholt-Pedersen, Gus Trompiz and Keith Wallis; editing by Jason Neely and Susan Thomas)
• Neptune Orient Lines • Singapore • South Africa