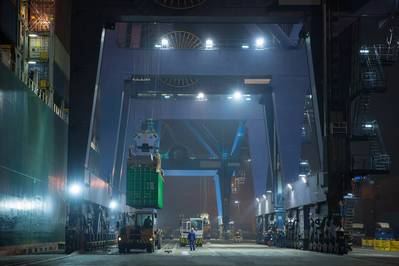 China’s exports and imports are expected to record double-digit declines in April after a tentative recovery in March as the coronavirus pandemic batters global demand and disrupts manufacturing supply chains, a Reuters poll showed on Wednesday.

The pessimistic projections reinforce concerns that the collapse in global demand will restrain the recovery in the world’s second-biggest economy as it gets back on its feet after weeks of paralysis due to the virus outbreak.

Shipments out of China are likely to have fallen 15.7% in April from a year earlier, according to a median estimate from the survey of 28 economists, far worse than a 6.6% contraction in March. Exports contracted by 17.2% in the first two months of the year.

Imports, meanwhile, are expected to have shrunk 11.2% from a year earlier, the sharpest drop since July 2016 and versus a 0.9% fall the previous month as domestic demand remained tepid.

The trade surplus for the month was forecast at $6.35 billion, down from $19.9 billion in March.

“The cracks in overseas supply chains and shrinking demand would lead to further declines in exports (for the second quarter),” said analysts at Industrial Bank in Shanghai in a note on Sunday, adding that more than half of China’s processing trade depends on imported materials from other countries.

The bank is forecasting exports will drop 15% on year in the second quarter, compared with a 13.3% fall in the first quarter.

China’s factories suffered a collapse in export orders in April, latest surveys showed, amid reports that foreign customers cancelled a bulk of orders as the coronavirus health crisis shut down large parts of the world economy.

The second quarter is usually a busy season for container business at Chinese ports, China’s port association said last month, but as the COVID-19 respiratory disease spreads globally, growth in container traffic has been crimped by a slowdown in global logistics and capacity cuts at shipping companies.

It estimates that container traffic could fall by 10%-15% in the second quarter.

Last month, China announced that its parliamentary meeting or National People’s Congress would open on May 22, when Beijing reveals major economic and social targets for the year.

“We think Beijing will most likely substantially lower its 2020 GDP growth target due to the severe blow from COVID-19 on China’s and the global economy,” said Nomura analysts, adding that they expect the target to be no higher than 3%.

“We believe it’s unrealistic for Beijing to stick to its long-held promise of doubling real GDP in the decade of 2010-20, which requires above 5.5% growth in 2020.”

China is also facing fresh pressure on the trade front as U.S. President Donald Trump threatens new tariffs on Beijing in retaliation for the pandemic.

Analysts have warned it could take months before the Chinese economy returns to normal and widely expect Beijing to roll out further stimulus, including a more proactive fiscal policy with an increased fiscal deficit ratio and stepped-up bond issuance to support infrastructure spending.

More monetary policy support is expected, too. The central bank has lowered benchmark lending rates and interest rates on key lending facilities to keep liquidity ample in the interbank market.