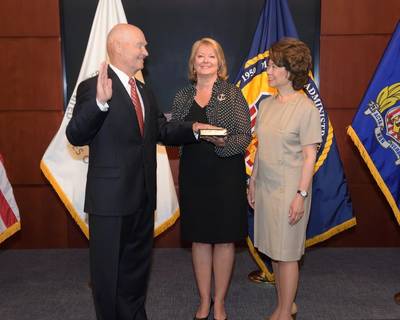 Rear Adm. Mark H. Buzby, USN, Ret. has been sworn in as the Administrator of the Maritime Administration by U.S Secretary of Transportation Elaine L. Chao.
As Maritime Administrator, Buzby will lead the agency tasked with promoting the use of waterborne transportation and its seamless integration with other segments of the transportation system; and the development and maintenance of an adequate, well-balanced U.S. merchant marine, sufficient to carry a substantial portion of the Nation’s waterborne commerce, and capable of service in time of war or national emergency. The Maritime Administration also oversees the U.S. Merchant Marine Academy.
“Our maritime industry is facing unprecedented challenges in our increasingly globalized world,” said Secretary Chao. “Administrator Buzby’s extensive naval and maritime background will serve as a tremendous asset to the Maritime Administration.”
Prior to his appointment, Admiral Buzby served as president of the National Defense Transportation Association (NDTA), a global association of transportation and logistics professionals.
A career Naval officer with over 34 years of service, Buzby has an extensive background in maritime transportation and leadership, having served on the staffs of the Sixth Fleet, the U.S. Fleet Forces Command, the Navy staff, and the Joint Staff. Prior to his retirement from the U.S. Navy in 2013, Buzby served as the Commander of the Military Sealift Command (MSC) from October 2009 to March 2013. MSC is the provider of ocean transportation for the Department of Defense - operating approximately 120 ships daily around the globe.
During his career, Buzby commanded destroyer USS Carney (DDG 64), Destroyer Squadron Thirty-One, Surface Warfare Officers School Command, and Joint Task Force Guantanamo Bay. As a junior officer, Buzby served in USS Connole (FF1056), USS Aries (PHM 5), USS Yorktown (CG 48), USS John Paul Jones (DDG 53) and USS Shiloh (CG 67) primarily in operations and combat systems billets.
A 1979 graduate of the U.S. Merchant Marine Academy, Buzby earned his Bachelor of Science in Nautical Science and U.S. Coast Guard Third Mate License. He is a graduate of the Joint Forces Staff College and holds master’s degrees from the U.S. Naval War College and Salve Regina University in Strategic Studies and International Relations respectively.
His personal awards include the Defense Superior Service Medal, Legion of Merit (four awards), Bronze Star, Defense Meritorious Service Medal, Meritorious Service Medal (five awards) and various other unit and campaign awards.
“I grew up on the water, piloting vessels from the time I was nine years old, and have a lifelong love for the sea,” Admiral Buzby said. “It is one of the great honors of my life to serve as Maritime Administrator, and to start working to grow and revitalize the U.S. Merchant Marine, and ensure our nation continues its maritime leadership.”
• Department of Defense • Elaine L. Chao • Legion of Merit