Bollinger to Build 6 More FRCs for the USCG 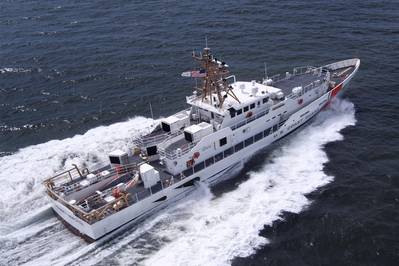 The U. S. Coast Guard (USCG) awarded a $255 million contract option to Bollinger Shipyards of Lockport, La., July 23, 2014 for the production of six more Sentinel-Class FRCs, bringing the total number of FRCs under contract with Bollinger to 30, with a current contract value of $1.4 billion. The FRCs acquired under this contract option are scheduled to be delivered in 2017 and will be homeported at various bases throughout the U.S.

Chris Bollinger, President of Bollinger Shipyards said, “We are extremely pleased that the Coast Guard has awarded six additional Fast Response Cutters, (FRC) to our current contract. This award reflects the continued confidence that the Coast Guard has in our vessels. This contract option will continue to provide jobs for hundreds of dedicated craftsmen employed at Bollinger as well as our subcontractors in the Southern Louisiana area. We are very proud of the fact that we have built and delivered every patrol boat in the Coast Guard’s entire fleet. Through hard work and commitment to quality, our exceptional workforce consistently exceeds customer expectation in the production of these patrol boats that are making a positive impact on the safety and security of our nation.”

On June 25, 2014, Bollinger Shipyards delivered the USCGC Raymond Evans, the 10th FRC to the USCG. The Coast Guard took delivery on June 25, 2014 in Key West, Florida and is scheduled to commission the vessel in Key West, Florida during September, 2014. Delivered FRC’s operating in the Southeastern U.S., the Bahamas and the Caribbean have already had a major impact on Coast Guard operations. Recent interdictions by the USCG’s FRCs Paul Clark and Charles Sexton resulted in the seizure of thousands of pounds of marijuana and cocaine. In addition, FRCs in South Florida have interdicted hundreds of illegal migrants attempting to reach our shores and saved more than 100 lives. Coast Guard Flag Officers have consistently termed the FRCs as operational “game changers”.

The Sentinel-class is fast replacing the Coast Guard’s Island-class 110-foot patrol boat. The FRC uses an in-service parent craft design based on the Damen Stan Patrol 4708. It can operate at speeds over 28 knots and is armed with one stabilized, remotely-operated 25mm chain gun and four crew-served .50 caliber machine guns. Other requirements include the ability to perform independently for a minimum of five days at sea and capable of underway operations for a minimum of 2,500 hours per year. It uses state-of-the-market command, control, communications and computer technology that are interoperable with the Coast Guard’s existing and future assets, as well as Department of Homeland Security and Department of Defense assets. The cutter meets American Bureau of Shipping design, build and class standards.