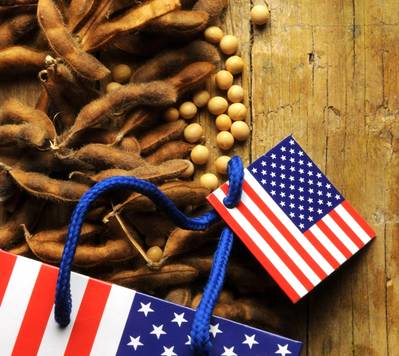 In the first four months of the 2020/2021 U.S. marketing year for soya beans (which started on 1 September), 2.5m tonnes of soya beans were exported in containers, accounting for 6.3% of total exports, while 37.1m tonnes departed the U.S. in dry bulk ships.

Despite the record high containerized soya bean exports, the share of total U.S. soya bean exports being sent in containers has fallen from previous years and is currently at its lowest level since the same period in 2017. The scenario is unfolding at a time when some agricultural exporters report of difficulties getting access to containers, accusing carriers of preferring to send empty contain-ers back to start a new fronthaul trip out of Asia, rather than accept agricultural cargoes.

Assuming that one 20-foot container (TEU) can fit 20 tonnes of soya beans, around 124,400 TEU containers have sailed from the U.S. with soya beans in the first four months of this season, a rise around 81,700 TEU in the previous season.

“The drop in the share of exports that are containerized confirms that some exporters may be hav-ing trouble securing boxes. However, the fact that overall volumes have risen indicates that con-tainers have been available,” says Peter Sand, BIMCO’s Chief Shipping Analyst. “Furthermore, the 89.3% growth in total soya bean exports shows that even if some exporters have been unable to get hold of containers to fill, they have still been successful in exporting their soya beans,” says Peter Sand, BIMCO’s Chief Shipping Analyst. 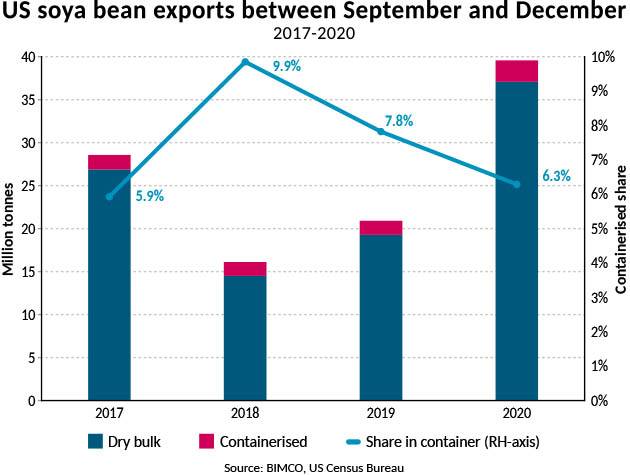