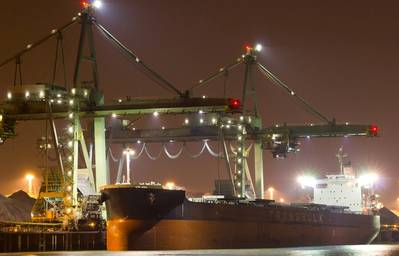 The Baltic Exchange's main sea freight index, which tracks rates for ships carrying dry bulk commodities, continued its gaining streak on Tuesday with a fresh more-than-two-year high, driven by strong demand for large iron ore vessels.
The overall index, which factors in rates for capesize, panamax, supramax and handysize shipping vessels, was up 51 points, or 4 percent, at 1,333 points, its highest level since November 11, 2014.
The capesize index climbed 145 points, or 5.5 percent, to 2,765 points, its best since November 25, 2014.
Average daily earnings for capesizes, which typically transport 150,000-tonne cargoes such as iron ore and coal, were up $1,391 at $20,657, the best day in more than two years.
"The Chinese steel market is the most important driver of the dry bulk shipping market... Over the past year, steel market demand has improved significantly," Morgan Stanley analysts said in a client note on Monday.
Iron ore stockpiles at major ports in China, the world's No. 1 steelmaker, rose for a second week, topping 132 million tonnes last week, the highest since at least 2004, according to SteelHome consultancy.
An increase in iron ore and coal shipments to China, owing to the curbs on production by the country in addition to ramping up of output in Australia and Brazil have helped average spot rates and thereby the Baltic index, analysts said.
Iron ore shipments account for around a third of seaborne volumes on the larger capesizes and iron ore price developments are a key factor for dry freight.
Chinese steel rebar prices rose on Tuesday, snapping a week-long rout, as renewed optimism about capacity cuts in the world's top steel producer offset lingering worries about high inventory levels and waning demand growth.
The panamax index was up 53 points, or 4.23 percent, at 1,306 points.
Average daily earnings for panamaxes, which usually carry coal or grain cargoes of about 60,000 to 70,000 tonnes, rose $421 to $10,487.
Among smaller vessels, the supramax index fell 2 points to 893 points, while the handysize index rose 5 points to 535 points.
(Reporting By Nallur Sethuraman in Bengaluru)
• Morgan Stanley • steel market • steel producer