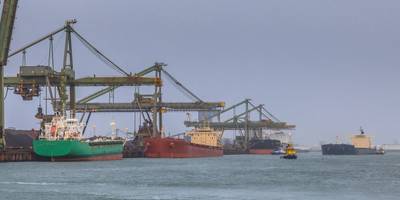 The Baltic Exchange's main sea freight index slipped to its lowest in nearly three weeks on Wednesday, dragged by a drop in demand for the larger capesize vessel segment.

The Baltic dry index, tracking rates for capesize, panamax and supramax vessels ferrying dry bulk commodities, was down for a fourth straight session, and dipped by 119 points, or 7.2%, to 1,540, its lowest since Jan. 7.

"This week, rates reversed to a downward trend with softening physical demand in both the Atlantic and the Pacific, while China's congestion levels have been easing," ship broker Intermodal said about the capesize segment in a weekly research note.

China's iron ore futures dipped on Wednesday, weighed down by concerns over a likely reduction in output by steel mills hit by losses due to high production costs and weak demand.

"Market participants expect a softening of restocking activities ahead of the Chinese New Year," Intermodal said.