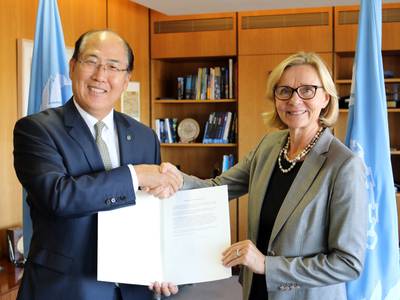 Päivi Luostarinen handed over the country’s instrument of acceptance to the Ballast Water Management Convention to Kitack Lim on Thursday, September 8, 2016.

Finland has acceded to the International Convention for the Control and Management of Ships' Ballast Water and Sediments (BWM Convention), triggering the 2017 entry into force of an international environmental protection measure that aims to stop the spread of potentially invasive aquatic species in ships’ ballast water, the International Maritime Organization (IMO) said.

Päivi Luostarinen, Ambassador Extraordinary and Plenipotentiary, Permanent Representative of Finland to IMO, handed over the country’s instrument of acceptance to IMO Secretary-General Kitack Lim on September 8, 2016, bringing the combined tonnage of BWM Convention contracting States to 35.1441 percent  of world merchant shipping tonnage, above the required 35 percent for entry into force. The treaty’s 52 contracting Parties is already well above the required minimum of 30 States, meaning the treaty will now take hold on September 8, 2017 (12 months after the stipulations were met).
“This is a truly significant milestone for the health of our planet,” Lim said. “The spread of invasive species has been recognized as one of the greatest threats to the ecological and the economic well-being of the planet. These species are causing enormous damage to biodiversity and the valuable natural riches of the earth upon which we depend. Invasive species also cause direct and indirect health effects and the damage to the environment is often irreversible.”
The BWM Convention was adopted in 2004 by the IMO, the United Nations specialized agency with responsibility for developing global standards for ship safety and security and for the protection of the marine environment and the atmosphere from any harmful impacts of shipping.
Under the Convention’s terms, ships will be required to manage their ballast water to remove, render harmless, or avoid the uptake or discharge of aquatic organisms and pathogens within ballast water and sediments
“The entry into force of the Ballast Water Management Convention will not only minimize the risk of invasions by alien species via ballast water, it will also provide a global level playing field for international shipping, providing clear and robust standards for the management of ballast water on ships,” Lim said.
Ballast water, routinely taken on by ships for stability and structural integrity, can contain thousands of aquatic microbes, algae and animals, which are then carried across the world’s oceans and released into ecosystems where they are not native. Untreated ballast water released at a ship’s destination could potentially introduce a new invasive aquatic species. Expanded ship trade and traffic volume over the last few decades has increased the likelihood of invasive species being released. Hundreds of invasions have already taken place, sometimes with devastating consequences for the local ecosystem.
The Ballast Water Management Convention will require all ships in international trade to manage their ballast water and sediments to certain standards, according to a ship-specific ballast water management plan. All ships will also have to carry a ballast water record book and an International Ballast Water Management Certificate. The ballast water performance standard will be phased in over a period of time. Most ships will need to install an on-board system to treat ballast water and eliminate unwanted organisms. More than 60 type-approved systems are already available.
IMO has been addressing the problem of invasive species in ships’ ballast water since the 1980s, when Member States experiencing particular problems brought their concerns to the attention of IMO's Marine Environment Protection Committee (MEPC). Guidelines to address the issue were adopted in 1991 and IMO then worked to develop the Ballast Water Management Convention, which was adopted in 2004.
IMO has worked extensively with the development of guidelines for the uniform implementation of the Convention and to address concerns of various stakeholders, such as with regards to the availability of ballast water management systems and their type approval and testing.
Shipboard ballast water management systems must be approved by national authorities, according to a process developed by IMO. Ballast water management systems have to be tested in a land-based facility and on board ships to prove that they meet the performance standard set out in the treaty. These could, for example, include systems which make use of filters and ultra violet light or electrochlorination.
Ballast water management systems which make use of active substances must undergo a strict approval procedure and be verified by IMO. There is a two-tier process, in order to ensure that the ballast water management system does not pose unreasonable risk to ship safety, human health and the aquatic environment.
• ballast water management systems • Finland • IMO's Marine Environment Protection Committee