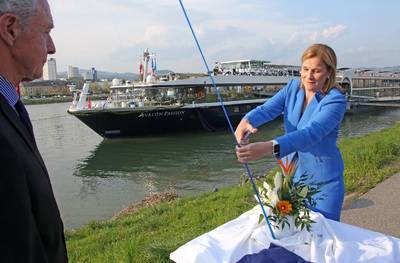 Built at a shipyard in the Netherlands, Passion joins eight other Avalon vessels sailing at least part of the year on the Danube. The river cuts through more than half a dozen countries including Germany, Austria and Hungary.
U.S. women's national soccer team coach Jill Ellis served as godmother for the 166-passenger vessel during a christening ceremony along the waterfront of Linz, Austria. It's a port the ship will visit often over the coming year.
"I am truly humbled to be here," Ellis told nearly 200 invited guests before cutting a ribbon that sent a bottle of Moet & Chandon champagne smashing against Passion's hull. She said that when she got the invitation, she thought, "this is like the coolest thing ever."
The ceremony took place under blue skies and featured a traditionally-garbed Austrian band. It was followed by a gala dinner on board and then fireworks.
With the addition of these two new ships and the retirement of the Avalon Scenery, which launched in 2008, Avalon's European river cruise fleet numbers 16 this year.
Passion has 67 of the Panaroma Suites, which offer 200 square feet of living space. That's about 30% more square footage than the standard river ship cabin.
Both Passion and Imagery II are part of Avalon's new Panorama class of ships, which began debuting in 2011 and feature a large number of extra-wide cabins called Panorama Suites.
• Austria • Danube • Germany