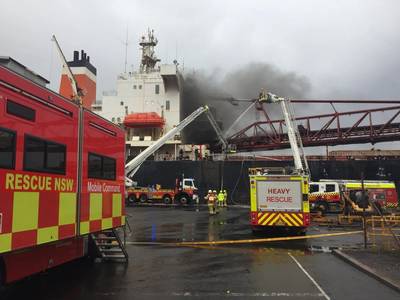 The port was shut soon after the blaze began before dawn on the MV Iron Chieftain as it unloaded dolomite, a mineral used in steelmaking which was destined for BlueScope Steel Ltd's nearby blast furnace. No injuries were reported.

"Shipping recommenced and the port reopened at 1130 (0130 GMT) and is expected to be back on schedule by around 1700," harbour master Kell Dillon said in an emailed statement.

More than 100 firefighters were working to put fire out, a job likely to take all day, a spokesman for Fire and Rescue NSW told Reuters. Pictures showed water being sprayed from tugboats and fire engines into the ship's hold.

BlueScope Steel said in an emailed statement that the blaze would have no impact on its steelmaking and none of its port equipment was damaged.

The port, also the state's largest vehicle import gateway, counts among its customers nearby coal mines run by BHP spinoff South32, which said its exports were unaffected.

The ship's owner, CSL Australia, said damage to the vessel was not immediately clear.