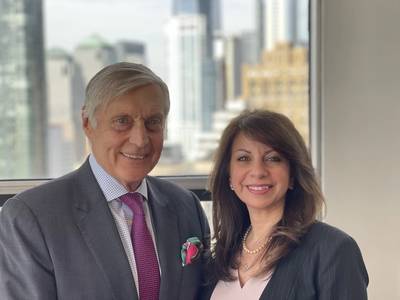 After 27 years’ service as Chief Executive Officer of Shipowners Claims Bureau, Inc. (SCB), the Managers of the American P&I Club, Joe Hughes will stand down from that role on August 1, 2022. Dorothea Ioannou, currently Deputy Chief Operating Officer of SCB, will succeed Hughes as CEO from that date, making history as the first woman to ascend to the top executive position of an International Group P&I club in the 167 year history of the marine mutuals.

At the same time, Vince Solarino will step down as Chief Operating Officer of SCB, Inc. after a similar length of service to that of Hughes, with Dan Tadros, presently Chief Legal and Compliance Officer of SCB, taking over the role of COO from Solarino.

Arpad Kadi will continue to discharge his duties as Chief Financial Officer and Tom Hamilton will continue in his role as Chief Underwriting Officer.

At the recent meeting of the American Club’s Board of Directors at which this news was announced, it was explained that Hughes and Solarino would remain, respectively, as Chairman and President of SCB to focus on the transitioning of their day-to-day operational roles to their senior colleagues, led by Ioannou in concert with Tadros, Kadi and Hamilton, and supported by SCB’s service teams throughout the world.

Hughes was originally recruited as Chairman and CEO of SCB (then owned by Johnson & Higgins) in 1995, to lead the American Club’s Vision 2000 initiative to internationalize and diversify its business. Prior to moving to New York, Hughes, an Oxford-educated barrister by training, worked at both Steamship Mutual and Gard, later becoming chairman of the global marine operations of JIB International, part of the Jardine Matheson Group, in the early 1990s.

Solarino joined Hughes shortly after the latter’s arrival in the United States, becoming CFO and then President and COO of SCB in 1999. A graduate in business administration and certified public accountant with diverse commercial experience, Solarino played a key role in working with Hughes to accomplish the accession of the American Club as a full pooling member of the International Group of P&I Clubs in February 1998.

Having established Eagle Ocean Management, LLC to acquire SCB from Marsh & McLennan (the successor to Johnson & Higgins) in 2002, Hughes and Solarino subsequently developed additional lines of business, most notably in the form of Eagle Ocean Agencies, Inc. which, in addition to operating the Eagle Ocean Marine (EOM) brand of the American Club, also acts as a program administrator for Validus/AIG in underwriting U.S. hull and liability cover under the Eagle Ocean America banner.

Ioannou was born, raised and educated in New York. A graduate of the City University of New York and St. John’s University School of Law, she relocated to Greece in 1997. After working originally in legal practice and insurance broking, Ioannou joined the newly-established SCB (Hellas), Inc., the Piraeus claims liaison office of SCB, in 2005. Initially employed as a claims executive, Ioannou subsequently rose to be the General Manager of the office in 2009, Regional Business Development Director in 2013 and Global Director of Business Development for the American Club in 2015. As part of SCB’s succession plan, Ioannou relocated to the company’s head office in New York in 2018. Having been appointed Deputy Chief Operating Officer some three years ago, and Secretary to the American Club in 2020, Ioannou’s elevation to Chief Executive Officer as of August 1, 2022 has been preceded by growing executive responsibilities over several years.

Dan Tadros joined the Club’s management team in July, 2019 as SCB’s Chief Legal and Compliance Officer. A U.S.-born, but Greek-raised, graduate of the University of Florida and the Loyola University School of Law, Tadros led the Admiralty practice at Chaffe McCall, LLP, a leading maritime commercial law firm based in New Orleans and Houston, before joining the Managers. In addition to his legal talents, Tadros brings to his new responsibilities considerable experience in the operating requirements of maritime service providers such as SCB. He is also well-known and highly regarded within the International Group, having in the earlier stages of his career represented many different clubs across a range of litigation and other matters.

Speaking in New York on the announcement of this news, Hughes said, “The last 27 years have been the most consequential of my professional life. The outlook of the American Club was, by common consent, not entirely promising in 1995, but it has enjoyed extraordinary growth and development since then. My colleagues and I take pride in the collective efforts which, over the years, have brought us to where we are today - marine insurers commanding universal respect within the industry. Most importantly, I have every confidence that Dorothea, as the first female CEO of a Group club management company, and Dan, together with Arpad and Tom, with the support of everyone in our service teams across the world, will take the Club and EOM to yet greater success over the years ahead.”

Solarino said, “I entirely endorse Joe’s remarks. We have confronted many challenges over the last 25 years or so but, with the support of our professional colleagues, our Members, their brokers, the Club’s Board and our many other friends across the globe, we have been able to expand and diversify our operations to achieve the highly regarded position we enjoy within the maritime community today. We extend our congratulations to Dorothea and Dan, who we are confident will continue the Club’s mission with the same enthusiasm and success. Joe and I remain committed to supporting our excellent global teams who have become both our family and our legacy. We are stepping aside, not stepping out!”

Ioannou said, “I am thrilled and excited with this new appointment, which as a woman carries with it not only responsibility and significance for our organization, but also, as a first in the P&I sector, for the marine insurance industry in general. I have from the start been proud of working with SCB, the American Club and EOM and the team of talented professionals across the world with whom I have spent the last 17 years. I have been particularly privileged by the mentorship of Joe and Vince and I look forward to building on the achievements of the past to generate yet further success in the future.”

Tadros commented, “The recent years during which I have had the privilege of serving SCB, the American Club and EOM have been enriching, not to mention educational, quite nicely dovetailing my time as a maritime lawyer. I am excited about and look forward to assuming my new responsibilities as SCB’s COO over the months ahead, and to working with my exceptional colleagues across the world in developing future success together.”