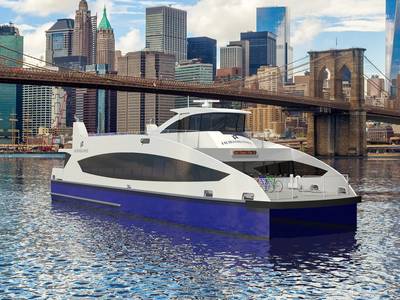 Metal Shark was selected by HNY Ferry Fleet, LLC (a Hornblower company), operator of New York City’s Citywide Ferry Service, to build 26-m149-passenger aluminum high-speed ferries.
Metal Shark will produce a series of ferries at its Franklin, Louisiana shipyard, a  25-acre waterfront facility which recently received a Small Shipyard Grant from the United States Department of Transportation’s Maritime Administration (MARAD) to expand its facilities and shipbuilding capabilities.
The new Citywide Ferry service is set to launch in the summer of 2017 and will offer affordable travel throughout New York City to waterfront communities that have long been transit starved. A new fleet of passenger ferries operating six routes over 60 miles of waterways will connect New Yorkers and visitors to waterfront communities across the boroughs, servicing over 4.6 million passenger trips annually and integrating into the city’s overall transportation network.
The ferries produced by Metal Shark will utilize an Incat Crowther USCG Subchapter T design that delivers a 25-knot operating speed while reducing environmental impact by incorporating low emission engines and low wake technology. The bicycle and stroller-friendly vessels are ADA-compliant and boast 360-degree views. Passenger amenities include onboard WiFi,  power ports for small electronics such as computers and cell phones, and large LED infotainment screens.
“The tremendous support we received from Incat Crowther helped make this project a reality,” according to Carl Wegener, Metal Shark’s director of commercial sales. “The entire collaborative process between Hornblower, Incat Crowther, and Metal Shark has been outstanding, and we’re proud to be a part of one of the largest domestic ferry builds in the past decade.”
“Hornblower conducted an exhaustive amount of market research during the course of their search for builders, and we are honored to have been chosen,” said Metal Shark president Chris Allard. “We are confident in our ability to meet the timeframes and deliver on this challenging and exciting project from the first vessel to the last.”
“It’s full steam ahead for New York City’s first citywide system in over 100 years and a system that will offer a new way to work, live, play,” said Cameron Clark, VP and GM at Hornblower.  “We are using the most advanced maritime practices and Metal Shark’s experience delivering large quantities of state-of-the-art vessels under a tight window to ensure that the newest additions to New York Harbor are up and floating before Summer 2017.”
The first new vessel is expected to be delivered in the first quarter of 2017.
• Carl Wegener • cell phones • Chris Allard