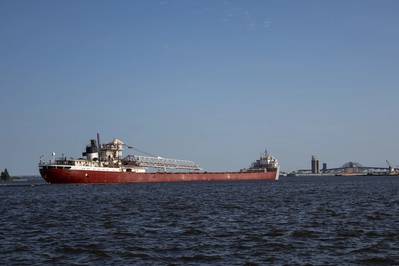 The U.S. Federal Maritime Commission (FMC) said it will initiate an investigation into whether ballast water regulations proposed by the Government of Canada discriminate against U.S. flag vessel operators in the Great Lakes and St. Lawrence River.

The FMC commissioners voted unanimously to accept a petition filed by trade group the Lake Carriers’ Association (LCA) asking the commision to perform the investigation and examine the detriment and harm to the U.S. flag fleet resulting from the proposed regulations.

The LCA says in its petition that Canada's proposed regulations requiring vessels that operate exclusively on the Great Lakes and St. Lawrence River to install ballast water management systems (BWMS) to treat ballast water that is loaded in Canada and discharged in the U.S. would drive U.S. vessels out of the cross-Lakes U.S. export trade to Canada.

"Loading ballast water in Canadian waters, as opposed to discharging it, does not result in the potential introduction of nonnative organisms into Canadian waters. There is thus no reason from a Canadian environmental perspective to impose the regulatory requirements on a vessel simply because it loads in a Canadian port ballast water that will be discharged at a U.S. port, and the proposed regulations cite no scientific evidence addressing this particular action," the petition says.

The FMC said concerns about the proposed regulations and their effects on U.S. flag lakers have been expressed to Transport Canada in meetings and phone conferences for several years.

"Representatives of American industry and the U.S. government have repeatedly, and in many different forums, raised serious concerns about the ballast water regulations being developed by Transport Canada," said FMC Chairman Michael A. Khouri.

"The potential discriminatory effect these regulations – and the possible adverse impact of even the pendency of these proposed regulations – might have and be having on U.S. shipping in the Great Lakes trade area has been made clear to representatives of the Canadian government.

"This Section 19 investigation will provide the Commission the opportunity to explore these issues more fully while the Canadian government considers future actions concerning their ballast water regulations.

"The Commission’s action today to initiate this Section 19 investigation will provide the Commission the ability to act quickly in the event it is necessary to level the playing field for the U.S. Great Lakes fleet."

The FMC is authorized under Section 19(1)(b) of the 1920 Merchant Marine Act to ensure that U.S. foreign commerce is not burdened by non-market barriers to ocean shipping, and the agency could potentially take countervailing action to correct unfavorable shipping conditions in U.S. foreign commerce.

"I understand the need to protect the ecosystems in the lakes from invasive species and how important it is that we have a good relationship with our Canadian friends. That said, I also know the importance of the U.S. lake carriers to the region’s economy and the country as a whole. Ensuring the U.S. lakers are on even footing with their Canadian counterparts is vital," said Commissioner Daniel B. Maffei.

"If there is a chance the Government of Canada is using the International Maritime Organization ballast water regime as an excuse to treat U.S. flagged vessels unfairly, the Commission must investigate. If we find the petition has merit, we must not allow even our greatest trading partner to greenwash unfair protectionism," Maffei said.

Commissioner Carl W. Bentzel said, "I am concerned that the Canadian regulatory proposal implements requirements that were not envisioned as a primary focus of the IMO International Convention for the Control and Management of Ships’ Ballast Water and Sediments. The IMO treaty is intended to address the introduction of non-native aquatic species.

"Seemingly, the Canadian regulatory proposal requiring vessels that only load ballast water to install a BWMS would have no impact on the introduction of non-native aquatic species into Canadian waters. Additionally, the actions of potentially restricting the upload of ballast water if a vessel does not have a BWMS could impact the navigational stability and safety of U.S.-flagged vessels.

The FMC said it will publish a Federal Register notice in the coming weeks that will provide additional details about this commission action.