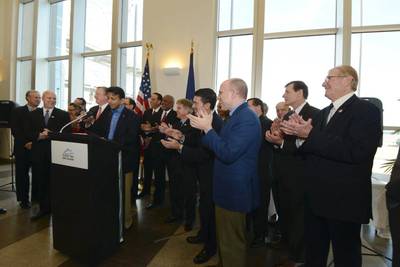 Louisiana Governor Bobby Jindal and International Shipholding Corp. President Erik L. Johnsen announced the company will relocate its corporate headquarters from Mobile, Ala., to New Orleans, where the business was founded in 1947. Listed on the New York Stock Exchange as ISH, the company owns and operates a global fleet of waterborne cargo vessels. ISH recorded annual revenue of more than $310 million in its just concluded 2013 fiscal year. After Hurricane Katrina, recovery challenges led the company to relocate its corporate headquarters to Mobile.

In New Orleans, ISH will create 100 new direct jobs at a 45,000- to 50,000-square-foot headquarters facility in the city’s Warehouse District, where the company will soon complete a purchase of property already under contract. The new direct jobs will average $70,000 per year, plus benefits, and LED estimates the project will result in an additional 113 new indirect jobs, for a total of more than 210 new jobs in the greater New Orleans area.

Governor Jindal said, “I am excited to announce the return of International Shipholding Corporation to New Orleans, where ISH will continue a great tradition of maritime and international commerce companies operating in Louisiana’s largest city. ISH could have stayed in Mobile, but they are coming back home because of our strong business climate, expanding industrial projects, resurgent New Orleans economy, and business growth along the Mississippi River. We have worked long and hard to bring back this storied company to its rightful place in New Orleans. Not only is this a great international commerce win for our state, but ISH will provide outstanding professional career opportunities in New Orleans and add another publicly held company to our growing business community. International Shipholding’s return affirms a genuine truth about New Orleans – this city is back, and better than ever before.”

In addition to operating a diversified fleet of 50 cargo vessels, International Shipholding provides brokerage, logistics and other maritime services for a broad array of customers, including the U.S. Department of Defense, the U.S. Department of Agriculture, International Paper, Norfolk Southern, Freeport Copper & Gold, Dow, Cargill, CSX, The Mosaic Company and more.

“We are pleased to be returning to New Orleans where the Mississippi River once again plays an important strategic role for our company,” Johnsen said. “We are excited to be returning at a time when the city has made significant progress in its recovery. We further believe we will be better-positioned in New Orleans to take advantage of transportation opportunities from the significant industrial investment being made in the state.”

This corporate headquarters project underscores a New Orleans business renaissance across many industries since 2008. Project wins include multiple expansions, for example: $90 million in capital investment, 450 retained jobs and 140 new direct jobs created by J.M. Smucker’s Folgers Coffee business; a multiphase iron-and-steel project by Nucor Corp. in St. James Parish that represents a capital investment of up to $3.4 billion with 1,200 new direct jobs and 4,800 new indirect jobs; a new 150-job digital game-development studio by Paris-based Gameloft SA in downtown New Orleans; a 300-job IT Center of Excellence by GE Capital, also in the New Orleans Central Business District; the corporate headquarters retention and expansion of Smoothie King, with 60 new direct jobs in Jefferson Parish; more than 70 new professional jobs associated with the corporate headquarters relocation of Rain CII from Texas to St. Tammany Parish, near New Orleans, along with a $65 million capital investment in Louisiana manufacturing s
ites; and the headquarters retention and engineering center expansion of Pelican Engineering Consultants, with 195 new direct jobs in St. Tammany Parish.

LED began discussions with ISH about its potential corporate headquarters relocation in March 2011. To secure the project, the State of Louisiana offered the company a competitive incentive package that includes performance-based grants of $5.17 million to offset costs of establishing the new headquarters facility in New Orleans and $5.10 million to reimburse relocation costs associated with the company’s move. In addition, ISH will receive the comprehensive workforce solutions of LED FastStart®, the nation’s No. 1-ranked state workforce training program. Based upon ISH’s plans to renovate a historic structure, the company could be eligible for a Restoration Tax Abatement incentive waiving property taxes on improvements to the structure for up to 10 years, subject to approvals from the local governing authority and the State of Louisiana.

“New Orleans is open for business, attracting private investment and introducing major developments in neighborhoods across the city,” New Orleans Mayor Mitch Landrieu said. “The return of International Shipholding reflects the economic growth, jobs and increasing opportunities that will help us rebuild better than we were before.”

International Shipholding Corp. will conduct its headquarters facility renovation in 2014 and 2015 and relocate employees and resources as the corporate headquarters is completed. The entire transition will be concluded by the fourth quarter of 2015, when ISH will begin formal operation of its headquarters in New Orleans.

“We are elated to welcome International Shipholding home after their departure following Hurricane Katrina,” said President and CEO Gary LaGrange of the Port of New Orleans. “We have a real opportunity to work with them on the implementation of Louisiana’s new international trade master plan, which will affect Louisiana globally.”