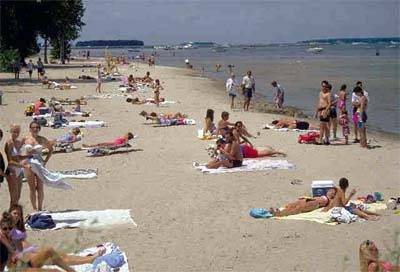 The US Environmental Protection Agency (EPA) has awarded a contract to Blue Water Satellite of Bowling Green, OH to provide unique historical data regarding the concentrations of potentially harmful Cyanobacteria, Chlorophyll-a, and Phosphorus at four Great Lakes beaches. This historical data will be used as part of an epidemiological study to potentially correlate concentrations of various biological constituents with human health effects.

“Blue Water Satellite technology is literally the only means for the EPA to retrieve the corollary data they need from 2003 and 2004,” states Milt Baker, CEO for Blue Water Satellite. “Our patented and patent pending technology can accurately identify and quantify the concentration levels of Cyanobacteria (often called Blue Green Algae or Harmful Algal Blooms), Phosphorus, and Chlorophyll-a in water bodies. This was a critical aspect of the EPA study.” Blue Water Satellite’s proprietary technology has the ability to retrieve and analyze data back to 1984.

Baker added: “One of the aspects of our technology the EPA appreciated was the volume and depth of our data,” concluded Baker. “Instead of just several sample points across hundreds of acres of shore line, we are able to provide 5 samples per acre – with each point including a GPS coordinate and concentration level.”

Blue Water Satellite technology has or is currently being used by NOAA, British Petroleum, Pacific Gas & Electric, The US Army Corps of Engineers, and a variety of other companies and governmental agencies. Based in Bowling Green, OH, the company is the leading -- and only provider of algorithmically-enhanced satellite images and data for water quality monitoring with 12 patents that have been granted or are in the process of patent office approval.