Starting August 1 and until November 30, 2019, the Panama Canal will promote the implementation of the International Maritime Organization’s (IMO) annual recommendations on speed and maritime transit aimed at protecting cetaceans, which include whales, dolphins and other large aquatic mammals, during their nearby seasonal migration.With these measures, ships should proceed at a speed of not more than 10 knots in specified areas. Panama has monitored this requirement since December 1…

The Suez Canal Authority (SCA) has extended discounts concerning dry bulk vessels operating between American and Asian ports after considering “new changes in the global shipping market and the world economy”."SCA pays more attention to its users best interest, and has recently taken steps towards being the safest, most secure, most reliable and most competitive compared to other routes," said a press release.It said that the rebate granted to (Laden/Ballast) Dry Bulk Vessels operating between Americas' ports and Asian ports…

With this latest delivery of cranes, the APM Terminals Moin remains on schedule for completion in February 2019, when it is expected to raise commerce in Costa Rica by 23% according to Qbis Socioeconomic Impact Study. This second delivery of Ship-to-Shore and Electric Rubber-Tire Gantry Cranes (ERTGs) to APM Terminals Moin, Costa Rica brings the total on site to six and 23 respectively. The commissioning of the equipment was completed this week. “APM Terminals Moin is proud to celebrate this milestone…

First Ocean Vessel of 2017 Arrives at Port of Indiana

The first ocean vessel of the year arrived at the Port of Indiana-Burns Harbor marking the official opening of the international shipping season. Port officials welcomed the 413-foot general cargo carrier BBC Mont Blanc and presented the captain with the Ports of Indiana Steel Stein. "The arrival of the first ocean ship of the new year is an exciting time not only for our port, but also for our port companies and numerous other regional businesses that rely on the cargoes these vessels carry," said Port Director Ian Hirt. "For northwest Indiana, the opening of the St.

The Coast Guard offloaded approximately 350 kilograms of seized cocaine Monday from the Coast Guard Cutter Richard Etheridge at Coast Guard Base Miami Beach. During an Operation patrol on October 27, a Joint Interagency Task Force South marine patrol aircraft detected a go-fast vessel suspected of smuggling contraband in the Caribbean Sea. The Royal Fleet Auxiliary Wave Knight and an embarked Coast Guard Law Enforcement Detachment diverted to intercept the vessel. The RFA Wave Knight crew launched a helicopter and a smallboat with a Coast Guard LEDET aboard and boarded the go-fast…

Atlantic Hurricane Season to be Stronger than Expected

In its updated 2016 Atlantic Hurricane Season Outlook, NOAA calls for a higher likelihood of a near-normal or above-normal season, and decreases the chance of a below-normal season to only 15 percent, from the initial outlook issued in May. The season is still expected to be the most active since 2012. Forecasters now expect a 70-percent chance of 12–17 named storms, of which 5–8 are expected to become hurricanes, including 2–4 major hurricanes. The initial outlook called for 10–16 named storms, 4–8 hurricanes, and 1–4 major hurricanes.

CMA CGM to use Kingston As Transshipment Hub

French shipping giant CMA CGM plans to use Kingston Container Terminal,  Jamaica as a strategic Caribbean transshipment hub for an enlarged Panama Canal. The Port connects to US East Coast, the Gulf of Mexico, the Caribbean and northern Brazil. Kingston hub is centrally located in the Caribbean Sea, opposite the Panama Canal just one day’s sailing away, CMA CGM decided long ago to make this a strategic location. “Establishing a hub in Panama would have lengthened the route for certain lines plying the region…

Kongsberg Maritime has established a new country office in the Republic of Panama. Opened in January 2016 and situated in the ‘Canal Zone’ close to Panama City, Kongsberg Maritime Panama will service merchant fleet customers transiting the Canal and the extensive tug sector in the region, in addition to providing support for ongoing or planned land reclamation dredging and new port and terminal construction projects. Kongsberg Maritime Panama expands the Norwegian headquartered maritime technology company’s global presence to 65 offices…

Thirteen people died on Saturday after a small tourist boat sank amid strong winds off a remote island in the Caribbean sea, Nicaraguan government spokeswoman Rosario Murillo said. The victims, all from Costa Rica, died when the "Caribbean Queen" sank near Little Corn Island, a remote island 45 miles (70 kilometers) off the coast of Nicaragua. There were 21 people rescued, 13 from Costa Rica, three from Nicaragua, two from Britain, two U.S. citizens and one Brazilian, Murillo said.

Public can watch seafloor discoveries live online April 9-30. Beginning April 9, scientists aboard NOAA Ship Okeanos Explorer will begin a series of 20 dives to investigate previously unseen depths of the Caribbean Sea and Atlantic Ocean – and the public can follow along online. During dives that are expected to go as deep as 3.7 miles, a sophisticated unmanned submarine, called a remotely operated vehicle, or ROV, will broadcast live video from the seafloor, allowing anyone with Internet access to watch the expedition as it unfolds. 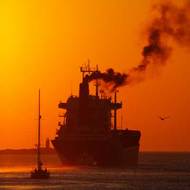 Ships trading in designated emission control areas will have to use onboard fuel oil with a sulfur content of no more than 0.10% from January 1, 2015, against the limit of 1.00% in effect up until December 31, 2014. To help provide further clarification on the new regulations, the International Maritime Organization (IMO) has published a frequently asked question (FAQ) list, available here: http://www.imo.org/MediaCentre/HotTopics/GHG/Documents/sulfur%20limits%20FAQ.pdf. The stricter…

As a high school track and basketball star and power forward for the U.S. Merchant Marine Academy Mariners basketball team, Shell Marine Products engineer MayMarie Culton understands a thing or two about coaching. Moreover, she combines six years’ experience sailing around the globe as a marine engineer with her professional career at Shell Marine Products (SMP) to advise customers how to get the best performance from their lubricants. Like sports excellence and coaching, it’s a natural fit.

A U.S. Customs and Border Protection, Office of Air and Marine P-3 aircrew operating out of National Air Security Operations Center (NASOC)-Jacksonville, Florida, detected a suspicious vessel carrying more than 1,100 pounds of cocaine with an estimated street value of more than $82.3 million. While patrolling the Pacific Ocean on Nov. 9 during a counter-drug mission, an aircrew aboard a P-3 Airborne Early Warning (AEW) aircraft spotted a high speed vessel moving through an area routinely used by drug smugglers.

CMA CGM said it will implement a low sulfur surcharge on all its trades in Emission Control Areas (ECAs) and for all cargos as of January 1, 2015. MARPOL Annex VI regulations for the prevention of air pollution from ships assign Sulfur Oxides (SOx) Emission Control Areas (ECA) with more stringent controls on sulfur emissions. Stricter regulations covering the sulfur content of fuel oil will be strengthened by local regulators in the European Union, U.S. and Canada. First implemented in the Baltic Sea more than 10 years ago…

The crew of Coast Guard Cutter Diligence returned to Wilmington following a 45-day patrol in the Caribbean Sea. While on patrol, Diligence served as the operational commander for all Coast Guard assets supporting Operation Southeast Watch in the Windward Pass between Cuba and Haiti. As the operational commander, Diligence maintained an overt presence in the Windward Pass to prevent and respond to any overloaded or unseaworthy vessels with persons attempting to reach the United States shoreline. 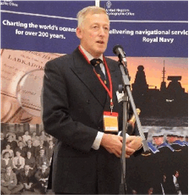 Captain Peter Kortenoeven, Hydrographer of the Royal Netherlands Navy, has been presented with the United Kingdom Hydrographic Office’s (UKHO’s) Alexander Dalrymple Award at a ceremony in London. The award is dedicated to Alexander Dalrymple who was the first Hydrographer of the Navy when the office was founded in 1795. The award was instituted in 2006 to coincide with the annual World Hydrography Day and is made to an individual who, in the opinion of the Senior Leadership team at UKHO, has shown outstanding dedication and delivered major contribution to world hydrography.