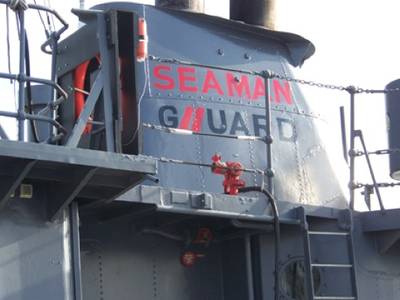 The International Organization of Masters, Mates & Pilots (MM&P), says 35 U.S. anti-piracy ship crew members are being treated unfairly, following the arrrest of their ship, 'Seaman Guard Ohio', describing it as 'an outrage' that they are being subjected to inhumane conditions in an Indian prison.

MM&P inform that officials are withholding proper medical treatment, bathing facilities and adequate food and, additionally, the courts have denied bail three times since the men were arrested four months ago on charges of illegally carrying weapons and straying into domestic waters. A new bail application may be heard later this week.

According to court documents, on October 12, 2013, an Indian Coast Guard cutter intercepted the ‘Ohio,’ after it allegedly, unlawfully obtained 10 barrels of diesel fuel in, what the government contends, was a clandestine manner. Indian authorities say the fuel was loaded on a fishing boat and taken out to sea to the Seaman Guard Ohio. Once in the port, 25 officials from eight different law enforcement agencies converged on the vessel; confined all crew members and guards; and falsely claimed that the ship was intercepted, according to the vessel's owners AdvanFort.

Police seized 35 automatic weapons and nearly 5,700 rounds of ammunition from the security guards on the ship.
Eight crew and 25 security guards aboard the vessel were arrested after they failed to produce documents allowing them to carry the weapons, according to Indian authorities.

The owners, AdvanFort, of Herndon, VA. contend: the vessel was “not involved in any activity prejudicial to the safety and security of the court” and based on the Doctrine of Innocent Passage as envisaged in Section three of the United Nations’ Convention on the Law of the Sea, 1982, no charge could be levelled against the crew or the vessel for violating the rules and regulations of India.

“This is an outrage -- a violation of every civilized standard,” says Captain James Staples, an MM&P senior advisor and spokesperson. “The circumstances surrounding the arrests is circumspect and the manner in which authorities are treating the crew is disconcerting.” He continues, “For example, the men were imprisoned for two months before they were formally charged.”